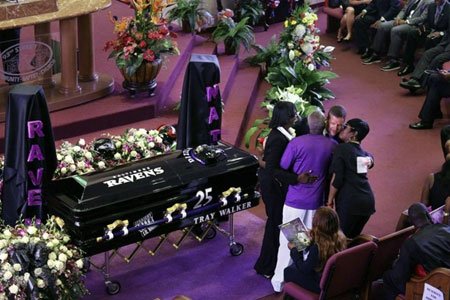 Tragedy struck the Baltimore Ravens recently. For the first time, an active player passed away. Tray Walker was only 23 years old and had a lot to live for. Unfortunately, that was all taken away from him on March 18, 2016.

The Ravens sent some of their high-ranking officials to Miami to support Walker’s family while he was in the intensive care unit. John Harbaugh sent a letter to the players informing them of Walker’s accident. He reminded them that they are a family and that one of their brothers needed their prayers.

The Ravens organization is truly a family. That is the mentality from the owner of the team to the people who take care of the garden at the facility, so it was no surprise the wat the team has come together in this time of tragedy.

Steve Bisciotti chartered a plane for members of the Ravens organization to go to Miami to attend Walker’s funeral and Harbaugh delivered the eulogy for Walker at the funeral. He spoke about Walker’s smile and how he showed the intensity needed to exist in the NFL.

Bisciotti vowed to help Walker’s family make it through the terrible tragedy.

“We have two sons not too much older than Tray, and we can’t imagine how much his family is suffering. This is so sad,” Bisciotti said. “The right words are hard to find at a time like this. As much as we can comfort Tray’s mom and the rest of the family, we will.”

Harbaugh also remembered how Walker told him that he wanted to take care of this mother. That was one of the things that stood out to the head coach when he first talked to Walker, the desire to take care of family.

Ravens assistant director of public relations, Patrick Gleason highlighted Harbaugh’s comments in a post on BaltimoreRavens.com: "A year ago, we had a pre-draft meeting, and we brought Tray in to find out what he was all about before we drafted him. He sat in my office, right across the table, looking me in the eye. The first thing I noticed was that smile— that big Tray Walker smile," Harbaugh recalled, drawing bursts of joy and applause from churchgoers. "I said, 'Tray, what's the most important thing, what's your No. 1 motivation?' And he said, 'I want to take care of my mom. I love her and I appreciate everything she has done for me.'"

Walker’s casket was adorned with the Ravens team logo and he had a Ravens helmet at his casket as family and friends paid their last respects. The Ravens will surely put together a nice video tribute that will be played prior to their first home preseason game.

The defensive backs have already discussed each of them wearing Walker’s number 25 at one point during a game in the upcoming season.

Harbaugh concluded his eulogy in typical Harbaugh fashion. The head coach is never afraid to tell his guys that he loves them.

“Tray Walker, we love you and we are going to miss you.” Harbaugh said.