The Republicans: Cowardice in high places 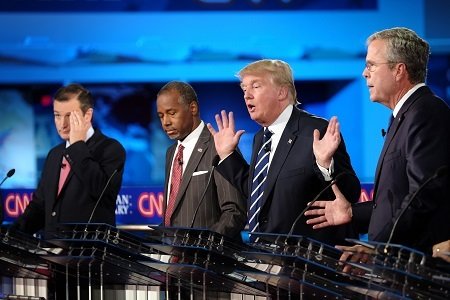 Jeb Bush endorses Ted Cruz. So do Marco Rubio and Mitt Romney. Chris Christie endorses— in fact, practically fawns all over—Donald Trump. Ben Carson suddenly thinks Trump would make a great president, in agreement with Vladimir Putin of all people. Paul Ryan bemoans the sorry state of his party’s campaign but refuses to name names and implies he’ll endorse whoever wins the nomination. The national chairman of the Republican Party likewise indicates unhappiness with the candidates but says he’ll endorse whoever wins. John Kasich appeals to reason but nobody is listening. Who will he endorse when he finally drops out?

These guys are cowards, pure and simple. They have no principles, no scruples, only a skewed sense of party loyalty, which communist party apparatchiks would surely appreciate. Rather than refuse to endorse either of the two frontrunners, they abide by a bizarre tradition of accepting their fate, holding their noses, and supporting candidates they have called— and who have called them— every name in the book. Sure, they say, Trump and Cruz are “con artists,” bigots, bullies— but at least they are our terrible people and, oh yes, they’re loyal conservatives.

Now I’m not so naïve as to believe that the endorsers really mean what they say in support of their suddenly wonderful candidate. Nor do I believe the fence sitters like Paul Ryan when they say (as Ryan did say) that we need to “raise our gaze and aim for a brighter horizon.” All of them are self-serving, jockeying for position, probably with an eye on winning or keeping a job in the next Republican administration. They are desperately trying to show that even though they have some problem with Trump and Cruz— hey, nobody’s perfect— they have an even bigger problem with Hillary Clinton. So they content themselves with supporting the “lesser evil,” or opting (like Ryan) for neutrality.

Let’s not leave this sorry lot without also noting that Trump and Cruz are cowards too, though they mask their insecurities with bravado. They will never acknowledge their race and gender-based hatreds, their moral deficits, their constant lying, or the real impact of their policies (or what passes for policies) on everything from military strategy to social programs and the environment.

History will record that when the Republican Party disintegrated, undone by two demagogues who represented depraved values and dangerous ideas, no one in the party dared to directly challenge and repudiate them. Instead, party leaders pretended that the demagogues’ views might somehow be toned down by wiser advisers or by the realities of power. Now that’s naïveté!

Mel Gurtov, syndicated by PeaceVoice, is Professor Emeritus of Political Science at Portland State University and blogs at In the Human Interest.