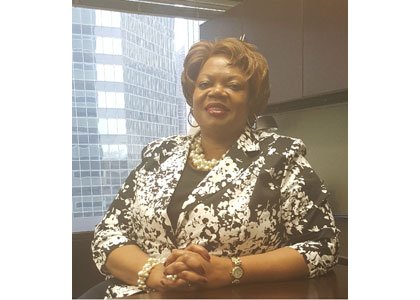 Vivian Fenton has been a volunteer with the Baltimore CASH Campaign since 2009. She helps to provide free tax preparation and savings opportunities for many individuals and families around the city. (Courtesy Photo)

Since 2009, Vivian Fenton has volunteered at the nonprofit where she helped to provide free tax preparation and savings opportunities for many individuals and families around the city.

“What stood out most for me as a volunteer is knowing that Baltimore CASH can help maximize an individual’s earning potential through various programs. Free tax preparation and coaching are the services I’m involved with,” said Fenton, an Assistant Vice President and Trust Administrative Officer with U.S. Trust/Bank of America.

Fenton also has been involved with Junior Achievement of Baltimore, The Arthritis Foundation, and The American Heart Association.

It also serves only to further validate the importance of financial literacy, particularly for school-aged students, according to Fenton.

“I read that one of the biggest influences on financial behavior as an adult is the way we saw money handled when we were young,” she said. “Money management is not always an instinctive behavior. We need to learn how to put it into practice. The earlier we can teach young people to make good financial decisions and it becomes a learned behavior, it then allows them to obtain financial independence.”

One obstacle students face is peer pressure, which Fenton says could taint their judgment and cause them to make irrational financial decisions.

“I grew up in a home where my mother taught me that needs versus wants can affect your purchasing decisions, and you don’t buy things because someone else has it,” said Fenton, a native of New York who has lived in the Baltimore area since 2003.

Fenton also has a strong Caribbean heritage as her parents were born in Montserrat in the British West Indies, where they learned the value of saving for the future.

“My mother emphasized that saving money was extremely important,” Fenton said. “I truly want to help young people understand that.”

While it appears that African-Americans lack or are deprived of real financial literacy education, Fenton says it’s important not to look back, but to keep focused ahead.

“As an African-American woman, I have to focus on the future,” she said. “We have to ensure that our community and the next generation have access to [the] tools and resources [available at] Bank of America’s BetterMoneyHabits.com, a free online resource for anyone with tools on a wide range of personal finance topics and the Baltimore CASH Campaign,” Fenton said.

“I co-chair the 20 and 30 Something Ministry at my church. Our focus is to empower young women in all areas of their lives. This will include financial empowerment sessions,” she said.

Fenton says her parents didn’t have a college degree or any formal financial education, but they still introduced her to the importance of saving and while they didn’t know about investing, they were still able to create a nest egg. That, she says, is a valuable lesson that sometimes even the lack of education or educational opportunities can be overcome with determination.

“It was a strong sense of self-worth and a concern for the future. Looking back, I realize they exercised due diligence, sacrificed and had a vision,”

Fenton said. “I saw and benefited from the reward and we have to continue to

impart that information to my African-American community because there’s a quote that I believe is so true, which says ‘People perish not because of lack of faith, they perish because of a lack of knowledge.’”