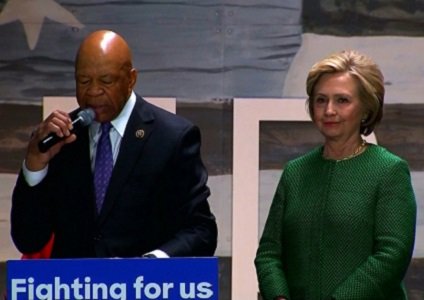 BALTIMORE (CNN) — After Hillary Clinton testified before the House Select Committee on Benghazi in October, aides said she was personally gratefully for Rep. Elijah Cummings' work as the panel's top Democrat.

On Sunday Cummings officially endorsed Clinton, ahead of Maryland's April 26 primary. Cummings had held out for months in endorsing Clinton, the only Democratic member of Maryland's congressional delegation to do so.

Cummings introduced Clinton and recounted her resume highlights, including her experience as secretary of state and senator from New York.

"This is why I will be voting for Hillary Rodham Clinton," Cummings said. "I am asking everyone one of you... to vote for Hillary. To be abundantly clear, I am endorsing Hillary Clinton for president."

Cummings said after his speech on Sunday that he had wanted to wait until the Benghazi committee wound up. Yet with the panel continuing to work, Cummings said he felt time was short to back a candidate, a bit more than two weeks out from the Old Line State's primary.

"I have seen him in many settings, but sitting in front of the Benghazi Committee for 11 hours, I have got to tell you, I was so proud to see him leading the Democrats," Clinton said. "And listening to him make the points that needed to be made. I wasn't surprised because that is the kind of congressman he is. I just have to tell you how lucky you are to have him as one of your leaders."

After noting his work into the investigation around the 2012 terrorist attack in Libya that killed four Americans, Clinton went on to call Cummings a "jewel" in Congress.

Clinton testified before the committee in October in an 11-hour session that was seen as a win for the former secretary of state, as even Republicans Republicans later said it produced no new revelations.

As head Democrat on the committee probing the 2012 terrorist attack, Cummings was known for aggressively challenging Republicans, including Chairman Rep. Trey Gowdy of South Carolina. Cummings regularly said Gowdy and other Republican lawmakers were using the investigation to damage Clinton's 2016 presidential campaign.

Clinton has spent the last week largely focused on the April 19 New York primary, where 247 delegates are at stake in her race for the Democratic nomination against Bernie Sanders.

But on Sunday Clinton sprinkled her stump speech with Maryland specifics references and promises.

"We need to look for every way possible to create new jobs, we need to be focusing on how we can bring investing to places that need it," Clinton said, touting her plan for urban revitalization. "As part of my plan, I will direct hundreds of billions of dollars to places like West and East Baltimore, including $20 billion aimed specifically at helping to create jobs for young people."