Chibok's girls: A glimpse of the stolen 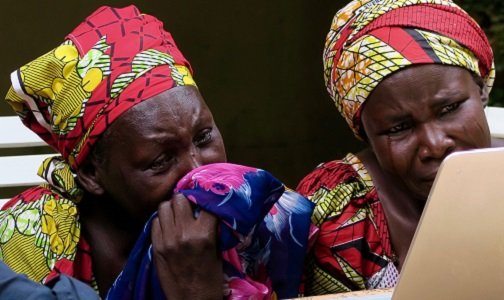 CNN obtained a video of some of the "Chibok Girls" sent to negotiators by their captors as a "proof of life." The parents hadn't seen it until CNN showed it to them. (Photo: Stephanie Busari/CNN)

MAIDUGURI, Nigeria (CNN) — They were stolen from their beds in a school dormitory: hundreds of teenage girls kidnapped by gunmen.

A few dozen escaped to tell of the night Boko Haram militants brought terror to a Nigerian girls' school.

From the rest, silence. No sign of where they had been taken or what could have happened to them for almost two years, even as the world screamed #BringBackOurGirls.

Hundreds of parents left, day after day, night after night, and then months with no information.

CNN obtained a video of some of the "Chibok Girls" sent to negotiators by their captors as a "proof of life."

The video had been seen by negotiators and some members of the government.

But no one had shown the parents. Until now.

Rifkatu Ayuba catches sight of her long-lost, desperately missed, now 17-year-old. "My Saratu!" she wails, reaching out to a laptop screen, the closest she's been to her child in two years. She is desperate to comfort her little girl, but helpless.

Saratu Ayuba is one of 15 girls seen in the recording shown to some of the families for the first time at an emotional meeting this week. Wearing a purple abaya, with a patterned brown scarf covering her hair, Saratu stares directly into the camera.

The video is believed to have been made last December as part of negotiations between the government and Boko Haram.

It was released by someone keen to give the girls' parents hope that some of their daughters are still alive, and to motivate the government to help release them.

The girls, their hair covered and wearing long, flowing robes, line up against a dirty yellow wall. They show no obvious signs of maltreatment.

As the camera focuses in on each of them, a man behind the camera fires off questions: "What's your name? Was that your name at school? Where were you taken from?"

One by one, each girl calmly states her name and explains that she was taken from Chibok Government Secondary School. Only the occasional hesitation betrays a flicker of fear and emotion.

As the two minute clip comes to an end, one of the girls, Naomi Zakaria, makes a final -- apparently scripted -- appeal to whoever is watching, urging the Nigerian authorities to help reunite the girls with their families.

"I am speaking on 25 December 2015, on behalf of the all the Chibok girls and we are all well," she says, stressing the word "all." Her intonation seems to imply that the 15 teens seen in the video have been chosen to represent the group as a whole.

The date given by Naomi matches information embedded in the video, suggesting it was filmed on Christmas Day, though whether that's true or whether the day was picked deliberately is unknown.