The 'Dirty Dozen': Group lists produce with the most pesticides

Strawberries topped the list as having the most pesticides this year 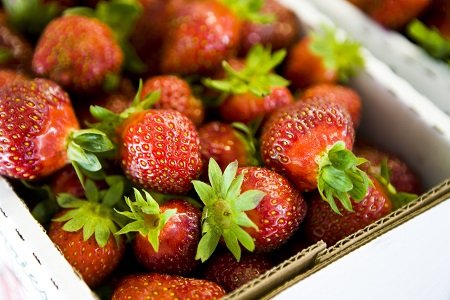 While the chemicals farmers use on food keep produce relatively pest-free, the U.S. Department of Agriculture constantly runs tests to avoid too much pesticide residue on your plate. (Photo: Amanda Greene/Turner)

(CNN) — Would you like a bit of pesticide with your produce?

While the chemicals farmers use on food keep produce relatively pest-free, the U.S. Department of Agriculture constantly runs tests to avoid too much pesticide residue on your plate. It concentrates particularly on produce items that children eat, since their developing bodies may be more vulnerable to harm from certain chemicals.

Of the produce samples the USDA tested in 2014, the last year for which data is available, nearly three-fourths showed some kind of pesticide residue, which is about in keeping with other years.

This amount persists despite growers' best efforts to clean up the produce, according to the Environmental Working Group, an environmental activist group. Annually, EWG puts together what it calls the "Dirty Dozen," a list of produce that has the most pesticide residue, according to the group's analysis of government data.

Topping the list this year are strawberries, beating out apples, which ranked first for the last five years. Since Americans eat almost 8 pounds of the fruit each year, according to EWG, this is a special concern for the group. Their analysis of the government tests found that strawberries had an average of 5.75 different pesticides per sample -- compared to 1.74 pesticides per sample of all the other produce the USDA tested. Strawberry growers use 60 different pesticides in a wide variety of combinations, according to EWG. One of the dirtiest samples tested for 17 different pesticides. Only about 7% of the strawberries sampled, though, had pesticide levels above what is considered allowable under U.S. law.

Generally, the USDA summary of its testing from 2014 concluded that "overall pesticide residues found in foods are at levels below the tolerances set by the U.S. Environmental Protection Agency."

While the pesticides may be at a legal level, if you would like to avoid them, look for organic versions of these fruits and vegetables. Even with organic produce, you will likely still want to wash it. Scrub firm produce like cucumbers and melon with a produce brush and thoroughly rinse -- even items that come in a package.