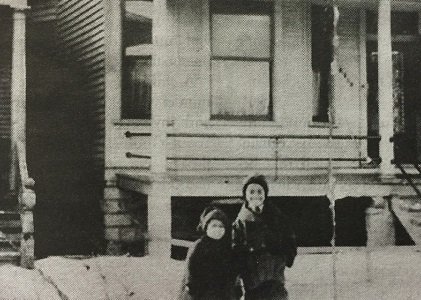 Time and neglect have beset Payne’s childhood home as crime and shootings continue to force residents to leave the neighborhood. (NNPA)

(NNPA) — Special to the NNPA from The Chicago Crusader

The roof is coming apart. The creaky wooden porch is aging with growing cracks. And the navy blue paint that once adorned the steps is peeling away. Nearly 100 years ago, this white, two-story house in Chicago’s West Englewood neighborhood on the city’s south side became the home of Ethel L. Payne.

As a black journalist, Payne broke racial barriers as a White House correspondent at a time when few black newspapers had a bureau in the nation’s capital. During her illustrious career with the Chicago Defender, Payne grilled five U.S. presidents and met Britain’s Queen Elizabeth, the Queen Mother. By the time she died in 1991 at 79, Payne had traveled the world, won numerous awards and earned the title, “The First Lady of the Black Press.”

Not many people know that Payne was raised in Chicago’s West Englewood neighborhood, located on the city’s south side, an where many famous blacks who made their mark in American history grew up. The house Payne lived in is a forgotten relic of her past. For 123 years, it has stood in the 6200 block of Throop Street.

Time and neglect have beset Payne’s childhood home as crime and shootings continue to force residents to leave the neighborhood. It’s where blacks who were fortunate enough be able to afford a home in the area worked hard to live the American dream after fleeing racism in the South. However, what was once a symbol of pride— Payne’s childhood home— is now a piece of history that’s crumbling. It’s decaying frame represents the struggle to preserve the legacy of America’s black trailblazers.

Payne was born in Chicago in 1911. Her parents came from Memphis, Tennessee and were among a few blacks that lived in the city before the population in the “Black Belt” exploded during the great Migration years later. Payne’s father, William A. Payne worked in the union Stockyards before he secured a job as a Pullman Porter. Payne’s mother, Bessie, a Latin scholar from Indiana, was a housewife.

Ethel was the second youngest of six children. She had four sisters and one brother. By the time they settled into Englewood, the neighborhood had become integrated, but racism was still rampant in other areas of the city.

The Paynes lived in various homes in Englewood until they purchased a wooden house that was built in 1893. It still sits among a row of small, four-room houses on Throop Street. The Payne family was among several people who lived on a street that was known as “the row.”

Across the street, the family attended Greater St. John AME Church, the oldest black church in Englewood. In her neighborhood, Payne and her siblings was fortunate to attend schools that were better equipped and had a large white student population. She walked to then Copernicus Elementary School— now Anna R.Langford Community Academy— just three blocks down the street.

When she didn’t have enough money for the streetcar, Payne walked to Lindblom Math and Science Academy (It was then called Robert Lindblom Technical High), a massive, neoclassical building at 6130 S. Wolcott Avenue.