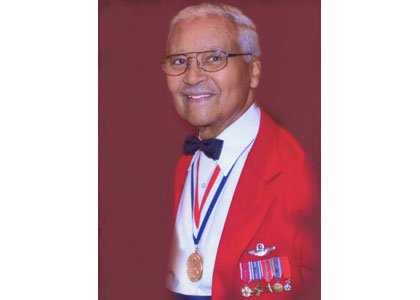 Tuskegee Airman Charles McGee, 96, will be on hand when the newly restored P-51 Mustang is dedicated in ceremony at the National World War II Museum in New Orleans on Thursday, April 21, 2016. The P-51 was used by the Tuskegee Airmen, America’s first black fighter pilots who earned their military stripes as the iconic Red Tails. (Courtesy Photo)

On Thursday, April 21, 2016, the National World War II Museum in New Orleans plans a dedication ceremony for the newly restored P-51 Mustang, the first American built fighter plane to push its nose over Europe after the fall of France. The Mustangs met and conquered every German plane, according to the Boeing Center.

Perhaps just as significant during the war, the P-51 was used by the Tuskegee Airmen, America’s first black fighter pilots who earned their military stripes as the iconic Red Tails.

“We began operations on February 14, 1944, patrolling Naples Harbor to the Isle of Capri, and we also did coastal patrol. My first patrol was on February 28 and we moved up to Capodichino on March 4, and did the rest of our tactical patrolling from there,” said Retired Air Force Col. Charles McGee, a longtime Baltimore area resident and one of the fewer than 200 Tuskegee Airmen to fight in World War II who are still alive today.

McGee, 96, will be on hand when the P-51 Mustang is dedicated in New Orleans.

He vividly recalled the action he experienced more than seven decades ago, including the various aircrafts involved in his series of combat missions.

During his decorated 30-year Air Force career, McGee flew more than 400 missions in WWII, Korea and Vietnam. In January 1973, McGee retired at the age of 54 and he lays claims as a charter board member and two-time national president of Tuskegee Airmen, Inc.

Known as the “Red Tails” because of the markings on their airplanes, McGee and the Tuskegee Airmen’s 332nd Fighter Group became such respected pilots that all-white bomber squadrons requested them as escorts over Nazi Germany.

Having graduated from flight school in 1943, McGee began flying missions the following year out of bases in Italy and he shot down a German fighter plane.

The Tuskegee Airmen’s success helped lay the groundwork for the civil rights movement and influenced President Harry Truman’s decision to desegregate the armed forces in 1948.

“That was a good feeling, certainly, one that we still are proud of - that we were able to overcome the circumstances that were part of policy and help bring about a new day,” he said.

In 2007, McGee and other Tuskegee Airman received the highest civilian award given by Congress, the Congressional Gold Medal, which was presented by President George W. Bush.

McGee says he continues to use his past to try to help young ones who are the nation’s future.

“The legacy I feel we leave is that our young people, regardless of their circumstances—they can achieve, if they believe it,” he said. “Today, it’s hard to reach young ones because they have their heads down and their fingers pushing buttons on their phones and devices. But, I try to tell them that they are the future of this country. Right now, people are planning to go to Mars and I tell the young ones that the planners aren’t the ones going, it’s going to be the young ones because the plans won’t be completed in time for those who are the planners but they will be completed for those who are growing up today.”

It’s his concern for the next generation that excites McGee about the upcoming dedication in New Orleans.

“The event is special because it’s doing something that everybody needs to know about. A lot of things we don’t need to repeat but we certainly need to know what was done and how we got to be here today,” McGee said. “The value of those lessons still are good for young folks today simply because they are America’s tomorrow.”

McGee believes it’s also vital that excellence becomes the goal of the young ones who should be determined not to let circumstances be an excuse for not achieving.

“Kids are bombarded with all the wrong stuff today but I try to pass on as much knowledge as I can,” McGee said. “Fortunately, in my younger years I learned to treat people the way I wanted to be treated. You have to become a servant to all, look out for others, take care of each other and help others as well as help yourself.”