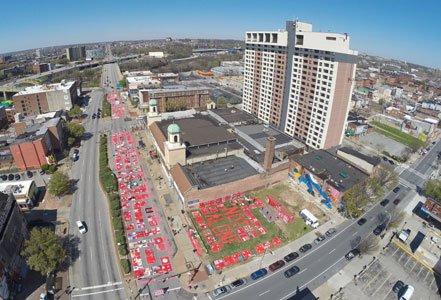 The Monument Quilt by FORCE: Upsetting Rape Culture is an ongoing collection of stories from survivors of sexual and domestic violence and messages of support from their communities was on display on Sunday, April 10, 2016 at the corner of North Avenue between Charles and Howard Streets.

In its largest display to date, the Monument Quilt blanketed two blocks of North Avenue between Howard and Charles Street with 1,500 stories from survivors spelling out “NOT ALONE.” The daylong event included readings, discussions, workshops and performances. This project is a recipient of the 2015 PNC Transformative Art Prize and was acknowledged during the day’s events. The PNC Transformative Art Prize, a program of the Baltimore Office of Promotion & The Arts, supports communities in their efforts to improve their surroundings through high-impact, community-driven public art projects. Qualified community-based nonprofits may be granted funding up to $30,000. Courtesy Photo/FORCE: Upsetting Rape Culture