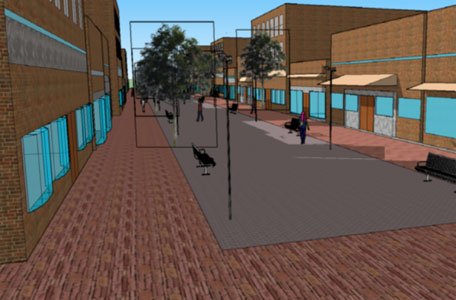 A group of tenth grade students from Baltimore City College presented their own plan for Governor Larry Hogan’s initiative on Thursday, April 21, 2016. (Above) A student's rendering of redeveloping vacant commercial space in Old Town. (Courtesy photo)

In January, Maryland Governor Larry Hogan announced a $700 million plan to tear down thousands of vacant buildings in Baltimore and replace them with new developments.

It was a new level of investment in Baltimore’s poorest neighborhoods that some called unprecedented, including in the Sandtown-Winchester area where Hogan joined Mayor Stephanie Rawlings-Blake in pledging $94 million over four years to demolish 4,000 vacant properties citywide and $600 million in subsidies to encourage redevelopment.

On Thursday, April 21, 2016, a group of tenth grade students at Baltimore City College presented their own plan for Hogan’s initiative.

Under the tutelage of technology teachers Jesse Lang and Peter Swartley, the students tackled an assignment to imagine and design new development for a block of vacant buildings targeted for demolition.

“In front of politicians, the students will propose a range of ideas that address homelessness, green space, fresh food, commercial space, recreation and rehabilitation,” Lang said. “They investigated and researched what products they needed; they researched the area and looked at demographics and even studied other cities and they came up with ideas based on all of that research.”

The students used Sketchup, 3D modeling software, to create specifications for what they believe should replace the blighted buildings.

Max Janes, one of the seven students who addressed the politicians and other officials says he thought their ideas were important.

“Baltimore has almost 17,000 vacant and non-occupied houses, more than almost any [other] city in the country. These houses are related to crime, which can make a neighborhood unhealthy and unappealing. By creating a plan to bring these areas back to life by redeveloping these properties we can make our city stronger,” Max said.

Classmate Lucy Pollard said she is excited to have an opportunity to help make her community a better place.

“My project is unique in that it specifically addresses one of Baltimore’s greatest failings, it’s high recidivism rate. It [also] offers students an opportunity to be involved in city government,” Lucy said.

When initially presented with the task, Aniya Watkins had an immediately reaction, she said.

“Oh my god. First, it was creating a website and now this. It sounds so hard but it actually wasn’t bad. It ended up being really cool and easier than I thought; especially once you figure out what tools you should use and how to use them,” said Aniya, hopeful that her project— the design of a park, will have a positive effect on her city. “Making it look more beautiful because a park looks a lot better than a bunch of vacant houses and I hope that the park will attract people to live in the neighborhood. I also want it to make Baltimore’s youth happier because I remember always wanted to go to the park as a child. I was fortunate enough to live near one, but a lot of our youth don’t so it would be nice to give them one.”

Though worried that she might “stumble over words” when addressing city officials about her project, Aniya says it’s important that she and her peers have a voice.

Her classmate, Eva Utzschneider said the fate of the abandoned buildings in Baltimore is a topic that’s relevant to all. Also, while she and her classmates’ plans may never come to fruition, it has already proven important.

“The motivation the project has instilled in students to make a difference in their city … I definitely believe that this project has shown [students] the possibilities of what they can do in Baltimore when they choose their career path,” Eva said.

Lang says he invited everyone possible to hear the students’ presentation.

“It’s their city, their future and we wanted them to have a voice. Politicians need to understand what the next generation need,” Lang said.