On Earth Day, commit to the Great Turning 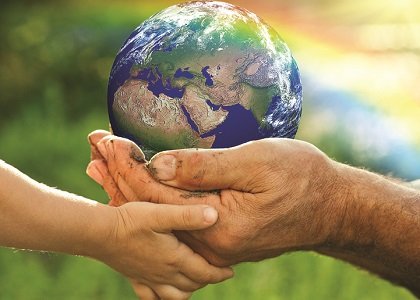 Viewing the destruction of the planet and our natural systems as a form of violence, Campaign Nonviolence— a long-term movement to build a culture of nonviolence— engages people across the country in working toward sustainability, renewable energy, reducing meat consumption, supporting local food, and many other practices of living nonviolently on this beautiful Earth.

As we commemorate Earth Day on April 22, 2016, we are called upon to recommit to protecting our planet to ensure that the human species and our fellow beings will have a long-term future. Founded in 1970, Earth Day is an internationally celebrated day, honoring the natural systems of the planet, and a day of action in support of climate protection. The commemoration was first proposed by two different people, peace activist John McConnell, who created the iconic Earth Flag, and Senator Gaylord Nelson.

In an era of climate crisis, Earth Day reminds us of the urgency and importance of transforming our way of life today! One resource for this is to reimagine these times as an epochal period of great change, one that many people are calling the Great Turning.

The Great Turning is a phrase popularized by teachers and writers Joanna Macy and David Korten that describes our current time period as a massive shift from the industrial growth society to a life-sustaining civilization. We may not make this transition in time to prevent catastrophic climate change . . . but billions of people around the globe are engaged in the three types of actions that support the Great Turning. These three types of actions are:

Holding actions to slow the destruction of human-based systems on the Earth and other beings. These activities include all the political, legislative, and legal work required to reduce the destruction, as well as direct actions— blockades, boycotts, civil disobedience, and other forms of non-cooperation and nonviolent intervention.

These are important to stop the worst of the destruction, but they are not enough on their own; they must be supported by creating new systems that support a life-affirming society, including local agriculture, reducing meat consumption, switching to renewable energy, creating mass transit systems, watershed protection and restoration, cooperative housing and eco-villages. And, to support the movement toward these visionary goals, it is also necessary to engage in shifting beliefs away from old concepts of domination, separateness, greed and destruction. We must move towards new understandings of interconnection, general and living systems theory, deep ecology, cooperation, and collaboration.

The three dimensions of the Great Turning are equally vital. Look around your community and notice how many people are engaged in one or several aspects of this work! Question your own participation - how do you contribute? What more could you engage in? What excites and intrigues you? For the Great Turning to be successful, we need all hands on deck! How will you be a part of this historic moment?

Author/Activist Rivera Sun, syndicated by PeaceVoice, is the author of The Dandelion Insurrection and other books, and the Programs Coordinator for Campaign Nonviolence.