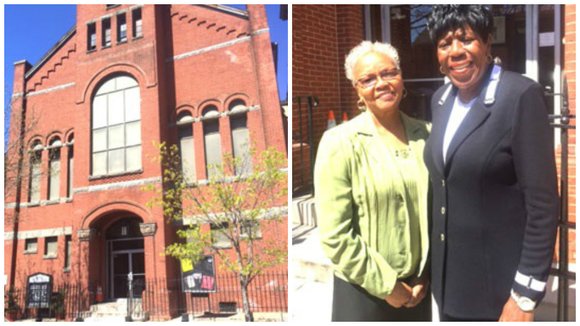 BALTIMORE — In 1836, a group of worshipers met in a small paint shop in South Baltimore for the purpose of singing and praying. The group was the first membership of what is now known as Ebenezer African American Methodist (A.M.E.) Church. Since its inception, Ebenezer A.M.E. has gone through many adversities and challenges, including the threat of having to shut its doors to make way for a highway project. But the church has withstood the challenges, and the test of time, and will celebrate its 180th Church Anniversary on Sunday, April 24, 2016.

Ebenezer is located at 20 West Montgomery Street in South Baltimore. The church will celebrate its historic birthday with several festivities, including a special worship service and a banquet.

The Rt. Reverend William Phillips DeVeaux is the presiding bishop, the Reverend Ernest L. Montague, Sr. is presiding elder, and The Reverend Dr. Ruth Travis, is the church’s senior pastor.

“Over the years, so many great people have graced that pulpit and brought forth God’s Word,” said Pastor Travis. “Through our church school, and related ministries, we have continued our tradition and charge to teach, train, nurture, prepare and recruit adults and children in God’s Word to serve and witness for Christ.”

“This church represents freedom,” said Matilda Barkley who is the coordinator of the church’s 180th church anniversary, and serves as president of the Matilda Monroe Women’s Missionary Society at Ebenezer. “This church started with four freed black members of the congregation. They purchased this property on Montgomery Street because they had a vision to build. They were part of the congregation deed that was titled in the name of members and their heirs.”

In 1846, Ebenezer with 25 members was officially organized as a Mission Church by Bishop Daniel A. Payne and Reverend William H. Jones was appointed to serve as Ebenezer’s first minister. The congregation was incorporated in 1848, and that year, Reverend Jones had the original frame building demolished and a forty-seven by fifty-foot brick structure erected on the lot.

Over the course of time, Ebenezer has faced a number of challenges to maintain the historical church, such as expensive repairs, and during the 1960s, the threat of condemning the property for a highway project. The church has also had to deal with declining membership over the years. According to Barkley, the church has a current membership of approximately 93 members.

“Over the years, members started to disperse,” said Barkley. “But we withstood it. Our oldest living member is Dorothy Wright, who is 97. Her mother brought her here when she was eight-years-old, and she is still a member.”

Pastor Travis added, “We have been able to pull together and do the things we need to do. Our church is well respected by the community. Part of my vision is to move outside the four walls of the church to share the good news about Jesus. I want to leave the church in a good place when I retire in 2020. I want to leave them in a good place financially and spiritually.”

According to Pastor Travis, she has been in the ministry since 1981, and served as an educator for 30 years. She is a former basketball, volleyball, and badminton coach on both the high school and college levels.

According to Pastor Travis, the church’s many organizations and ministries are a vital part of Ebenezer. They include the Steward Board, Trustee Board, Stewardess Board, Class Leaders, Matilda Moore Women’s Missionary Society, Young People and Children’s Division, Precious Gems, Lay Organization, and Flower Circle.

“In 1836, it was about singing and pray, and that's what we continue to do,” said Pastor Travis. “Our organizations and ministries are a vital part of our continued growth, and helps keep us moving. We have come this far by faith.”