What to watch on Super Tuesday

Maryland is one of 5 Super Tuesday states 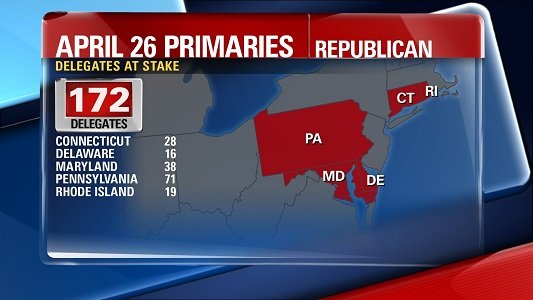 Pennsylvania, Maryland, Connecticut, Delaware and Rhode Island vote Tuesday April 26, 2016 in the "Acela primary."There are 172 Republican delegates at stake and 384 up for grabs on the Democratic side.

(CNN) — Donald Trump can't lock up the Republican nomination Tuesday -- but he can counter his two opponents' divide-and-conquer strategy and reassert his dominance in the race by running the table in five states.

Hillary Clinton, meanwhile, could finally start to see the finish line. If she's able to handily defeat Bernie Sanders, she could leave the Vermont senator with no real path to the Democratic nomination.

There are 172 Republican delegates at stake, and 384 up for grabs on the Democratic side, when Pennsylvania, Maryland, Connecticut, Delaware and Rhode Island vote Tuesday in the "Acela primary," named after the high-speed train that shuttles commuters up and down the East Coast.

Here are five things to watch in Tuesday's contests:

How big is Trump's win?

The anti-Trump alliance is finally in place. Texas Sen. Ted Cruz and Ohio Gov. John Kasich, Trump's last two foes still standing, have unveiled a divide-and-conquer strategy that will see Cruz focus his efforts on denying Trump a victory in Indiana, a key contest a week away, while Kasich campaigns in Oregon and New Mexico.

His opponents' targets might have shifted, but make no mistake: A sweep would be an important victory for Trump -- and a big step toward the 1,237 delegates he needs to clinch the GOP's nomination.

The Cruz-Kasich alliance only came together, after Trump crushed the competition in New York and then made clear to his opponents that they had no real room in Pennsylvania, Maryland, Connecticut, Delaware and Rhode Island.

Trump's go-to complaint now is that the GOP establishment's only chance of slowing his roll to the nomination is to deny the democratic process and steal it from him.

Of Cruz, Trump told a crowd in West Chester, Pennsylvania, on Monday: "So we're going to pick a guy that over a year got creamed, right? Got creamed. So you explain how that's done. You would have a revolt!"

Whether Trump eventually racks up the delegate count he needs or not, big wins in Tuesday's contests could drive that point home.

Just as important, even with Cruz and Kasich now finally on the same page in an attempt to stop Trump, more big victories could give pause to donors to the #NeverTrump movement.

Clinton looks to lock things up

Clinton tried to nudge Sanders a bit Monday night in a town hall on MSNBC, noting that she has a much bigger lead right now than then-Illinois Sen. Barack Obama held at this stage over her in 2008.

"It was so much closer than the race right now between me and Senator Sanders," she said.

Clinton also said she's not buying the Sanders campaign's belief that it can catch her in the total vote count when Democrats in delegate-rich California head to the polls in June.