VIDEO: Meet the white valedictorian of a historically black college 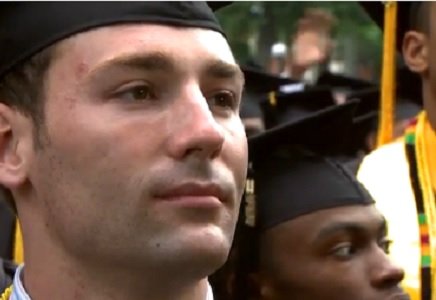 NEW YORK (CNNMoney) — At first glance, Joshua Packwood is the embodiment of white privilege: He's college educated, married, a father of two and he runs a successful hedge fund in Manhattan.

But his life, which began in Kansas City, Missouri, hasn't always been so good.

Meet the white valedictorian of a historically black college

Does "historically black" mean "exclusively black"? Founded after the Civil War to educate African-Americans who were largely barred from other colleges, financial pressures have led historically black colleges to adopt a new mission — diversify. Here's what it's like to be one of the 11% of students at HBCUs who are white.

Before Packwood was born, his father was in a motorcycle accident that left him unable to walk or talk. His mother had to care for her ailing husband and two sons alone. Eventually, Packwood's father went into an assisted living facility and his mother began a relationship with a man who became physically abusive. At the same time, she was struggling to find steady work and pay rent.

Packwood's clashes with his stepfather forced him to make the painful choice to leave home. He was just 11 years old.

He bounced from one home to another, briefly staying with friends and family, including a stint in a trailer park with an Inuit woman who had multiple sclerosis and an upper middle class white family where both parents were successful lawyers.

Then he began to rebel. He was expelled from two different schools and had a few minor brushes with the law.

When he was 13, Packwood had just stolen a bike when he ran into Timothy Jones, a middle school classmate who considered Packwood "a troublemaking punk." Slowly, Jones, who is black, and Packwood got to know each other better.

One day, Packwood was coming out of detention and missed his bus. He needed a place to stay so he asked Jones if he could spend the night at his house. Jones "very reluctantly" agreed, Packwood recalls.

Each night that week, Packwood asked if he could stay another night until finally Jones' parents decided to take him in. They bought him clothes and a bed to sleep on. "They treated me just like Tim," Packwood said, "As if I had been with them since birth."

The Joneses lived in Grandview, a lower-middle class suburb outside of Kansas City. Eartha "Mama" Jones was a stay-at-home mom, who occasionally worked as a part-time salesperson at a mall. Barry Jones, Sr., was a warehouse manager at Grainger, the industrial supply company.

"They got me focused, playing sports, focusing on my grades," Packwood said. "Having that structure, having that family there...it had a huge impact on me."

In addition to sports and school, the boys sang in a choir, played video games and made up their own rap lyrics. The Jones family "treated me just like one of their kids -- punishment, love and all," Packwood said.

The results were transformative. "I went from being expelled the previous year, to being the top student at the school and getting all these accolades," Packwood said.

He lived with the Jones family for about a year, before moving in with his grandmother. But Packwood still spent almost every day at the Joneses and, of course, with Tim.

By then, Packwood was about to start his freshman year at a predominantly black high school, which he described as "very, very poor." (Packwood says he was at "the lower tier of that economic breakdown.") The majority of the students -- including Packwood -- received free breakfast and lunch. Academically, he excelled and was a star athlete, playing varsity football, wrestling, track, and cross country.