Clergy United for the Transformation of Sandtown Brings About Change 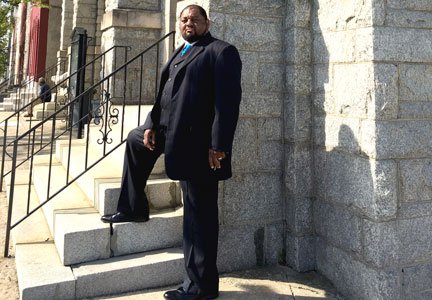 The events also ignited the revitalization of Clergy United for the Transformation of Sandtown (CUTS). The Reverend Dr. Derrick DeWitt, pastor of First Mount Calvary Baptist Church serves as president.

“CUTS was started in 1993 but had been dormant,” said Pastor DeWitt. “The Freddie Gray incident revived it. After the riots, there was a lot of focus on negative things in the community, such as crime, hopelessness, and the relationship the residents had with police officers. This was exacerbated by other things going on around the country involving the police. We thought it was important for people to know that we are anchors in the community, to partner with us, and to highlight the great things that are happening here.”

CUTS is comprised of 12 churches of different denominations, including First Mount Calvary, located on Fulton Avenue. The group is working hard to build bridges between the Western District police station and the community through events, chaplain rides with police, and other efforts.

The group’s projects include an urban farming program. According to Pastor DeWitt, the farming program employs former inmates to grow vegetables, and touts 19 greenhouses.

“We grow vegetables, harvest rain, and have greenhouses strictly for the community,” said Pastor DeWitt. “We grow kale, collard greens and nine different kinds of lettuce. We are really excited about the things we are doing. Many media images show liquor stores and other places of business burning, and we realized we had to do a better job to highlight the positive things that are taking place in the Sandtown/Winchester community.”

Pastor DeWitt is also the chief financial officer for The Maryland Baptist Aged Home, located in West Baltimore. He has hired local residents to work at the nursing home, which he plans to more than triple in size by the end of 2017. He wants to use the old building as a training center for local residents to become nurses, janitors and geriatric assistants.

“We provide housing, training, and hire people in the community,” he said. “We have turned a blighted area into an inner city farm, and hire people coming out of incarceration to work on the farm. Other churches in the area offer affordable housing, have implemented Safe Street campaigns, and have schools. The list goes on. Despite the negative images, there are some great things taking place in this community.”

He added, “First Mount Calvary also offers a food pantry. We give away soap, toilet paper, fresh produce, and more. We give people as much as they can carry. We also donate to other churches, and also offer a free program for 60 youngsters in the community.”

Pastor DeWitt has led First Mount Calvary Baptist Church in Baltimore since June of 2007. He is credited with resurrecting the church, which had struggled with financial challenges, and was slated to close.