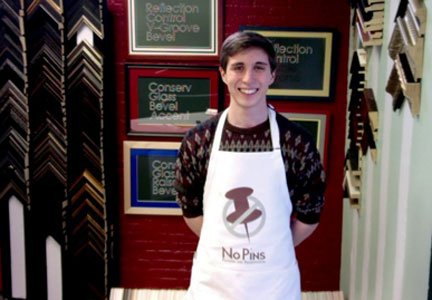 For Alexander Curtis, his foray into the business world was a little bit more than having just a dollar and a dream. It was a mission.

Curtis realized that Baltimore artists had few storefront framing and design facilities and opening a business had been a dream of his that he was willing to make numerous sacrifices to bring it to reality.

“As a young kid I always envisioned being in charge of my own destiny,” Curtis said. “I started working at Wimsey Cove Framing and Art the summer before my sophomore year at the Maryland Institute College of Art (MICA). Working alongside the owner, I quickly grew to love the framing process, and seeing the transformation of a simple piece of art— be it print, paint, or someone’s family mementos— into a beautiful display.”

While at the MICA, Curtis says he witnessed a range of artwork and also the haphazard ways students and artists presented their work. Simply put, it bothered him and more importantly, it drove Curtis to seek a facility that would work with the artists.

So, in 2014, he opened No Pins Framing located at 10 W. Eager Street in the Mount Vernon neighborhood, which he describes as a high quality brick and mortar retail store focused on art preservation, art handling and framing design services.

All products are designed and assembled in store by dedicated art specialists who believe that Baltimore’s families, artists, and businesses deserve the highest quality wall-ready displays, Curtis said. He’s also working with art organizations including the Maryland Institute College of Art and local community members to promote up and coming artists as well as design professionals.

“I had toyed around with the idea for a few years while working at the other shop, learning the trade from the owner, and seeing from her, what it means to be an entrepreneur,” Curtis said. “When the time came to settle on a senior thesis project, I decided to dive into what it would actually take to build a business. My

entire senior year was dedicated to the branding, financial planning, and store layout, and I took some seminars on small business structure and marketing.”

The process did, at times, take a toll on Curtis but he says he never thought of giving up on his dream.

“Throughout, I felt that I had learned a lot about what I was trying to accomplish and how to get there. So with those plans laid out and a ton of support from my family, I set out to get the funding and find a location,” he said. “In this trade, the work is generally very satisfying, so to say it was difficult wouldn’t be right. Once I would get into the groove and focus on the process, it actually allowed most of my current stress and schoolwork load to slip away.

“However, coming in for long shifts and having to stay focused on the day’s work was difficult especially around finals when papers and large art projects would be coming due,” he said.

Despite the difficulties, Curtis says he is enjoying where he is at today.

“Two years later, it feels like a distant memory but the ever looming deadlines and requirements of school work that come and go throughout the week definitely took a toll.”

Keeping afloat is an entirely different subject, one that Curtis says certainly has its share of challenges but he is ready to face them head on.

His biggest goal is customer satisfaction and ensuring that he turns first time customers into repeat clients.

Curtis admits that his business has struggled the most with outreach, having just a few part-time employees makes it difficult for the entrepreneur to get out into the field and try to recruit new clients.

It hasn’t prevented him from fostering new relationships with several local galleries, designers and artists, even offering space to some, he said.

“Art is never going away— our goal over the next five to 10 years is to expand and open new locations,” Curtis said.