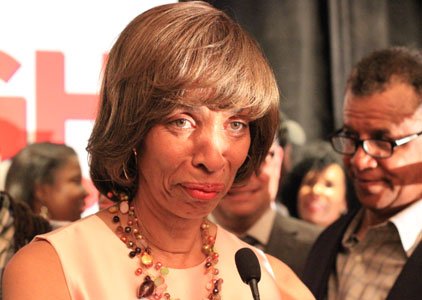 Democratic State Senator Catherine Pugh defeated former Baltimore Mayor Sheila Dixon in the race for mayor of Baltimore City in the primary elections on Tuesday, April 26, 2016. According to the latest results from the city’s Board of Elections, Pugh tallied 36.8 percent to Dixon’s 34.5 percent with 99 percent of the vote counted. Observers believe Pugh will easily triumph in November over Republican Alan Walden in the general elections. (Courtesy photo)

Hillary Clinton and Donald Trump dominated their parties Maryland primaries this week and continue on a collision course for a fall showdown for the top office in the land.

However, Baltimore residents may have been focused more on other races that had more direct local implications.

Chief among them was the race for mayor’s seat where Democratic State Senator Catherine Pugh defeated former Baltimore Mayor Sheila Dixon, according to the latest results from the city’s Board of Elections.

With 99 percent of the vote counted, Pugh tallied 36.8 percent to Dixon’s 34.5 percent, propelling her to what most observers believe will be an easy triumph in November over Republican Alan Walden.

Baltimore is heavily Democratic and political observers say its near impossible that Walden could beat Pugh in the fall with registered Democrats outnumbering Republicans by more than two-to-one.

“I am the Democratic nominee,” Pugh told supporters and the media during a speech after most of the votes had been counted late Tuesday. “My message is about inclusion, about lifting up the least of us.”

While Baltimore residents were glued to the mayoral primary, voters also had to decide the contentious race between Representative Chris Van Hollen and Representative Donald Edwards for the state’s Democratic nomination for Senate.

Like Pugh, Van Hollen is now heavily favored to win in November and succeed the retiring Senator Barbara Mikulski. Maryland hasn’t elected a Republican to the Senate in 36 years.

On Wednesday, April 27, 2016, numbers provided by the State Board of Elections revealed that Van Hollen grabbed 53 percent of the vote to Edwards’ 39 percent.

“I want to say to all Marylanders, whether you are from Baltimore or the Washington suburbs or Western Maryland, Southern Maryland or the Eastern Shore, I will fight hard for you every day in the United States Senate,” Van Hollen said after securing the victory on Tuesday night.

Edwards says the loss means that Maryland is on the verge of having an all-male delegation in what’s known as a progressive state.

At the end of the night, Mikulski embraced the idea of Van Hollen replacing her.

“It’s always been first and foremost the agenda and Chris Van Hollen and I have exactly the same agenda,” Mikulski said. “I’m comfortable not only handing over the reins but riding on the buckboard to help him get elected.”

In other races, Baltimore City Council President Bernard Young and Comptroller Joan M. Pratt, both Democrats, held onto their seats in the primary.

Kathleen Cox and Keith Truffer, both incumbents were projected winners in the race for Circuit Court Judge in District 3 in Baltimore County.

Klavans, however, was behind in the polls to Claudia Barber, who earned the fifth spot on November’s ballot.

Election night usually creates angst among voters and candidates alike and those who work at or near polling places. This election night proved no different.

According to a report from the American Bar Association Journal, a Tuesday hearing at a courthouse downtown took place over whether to extend the time that some polls would be open to voters. The hearing was moved to a nearby sidewalk and parking garage after a fire erupted in the courthouse basement and required the evacuation of the building.

However, Baltimore City Circuit Judge Althea Handy was not deterred and ruled from the bench at around 7:15 p.m. in the parking garage, that four of the polling places in question would be open an extra hour.

The emergency request was made by Edwards’ campaign, which contended that some polls had opened an hour late and lines were forcing voters to wait as long as 45 minutes to cast their ballots, the Journal reported.