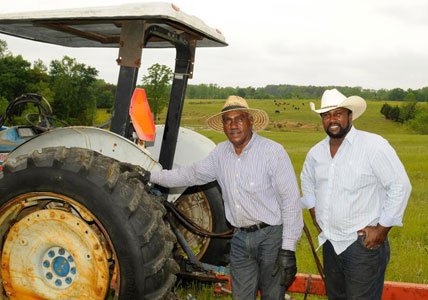 He works alongside his father, John Wesley Boyd, Sr., 75, who farms 117 acres nearby, which he inherited from his own father. Together they have faced drought, fluctuating crop prices and encroaching development. Farming isn’t an easy life, Boyd, Jr. said, but it’s one that he enjoys and hopes to pass down to his own children.

Unless, he said, his family is forced to sell the farm to pay the estate tax upon his death.

“People work hard to get something and make it grow,” said Boyd, 50. “Then, when they want to pass it on to their families, they owe the government so much in estate tax that the family has to sell the business to pay it. It’s not right.”

Boyd, founder and president of the National Black Farmers Association, is among a group of small and medium-sized business owners who are lobbying for the repeal of the estate tax, which federally is levied on transferable assets beyond $5.45 million— double that for married couples. The U.S. Senate soon will consider legislation to rescind the 40-percent federal estate tax. The House of Representatives voted to end it last year.

The estate tax, sometimes called the “death tax,” has been widely discussed since the loss of musician Prince Rogers Nelson, aka Prince, 57, who died without a will on April 21, at his Paisley Park Studio complex in Chanhassen, Minnesota. Prince, who died of an opioid overdose, was unmarried, had no children and was preceded in death by his parents.

Under Minnesota law, his sister and five half-siblings will inherit his assets, which are estimated to be worth up to $300 million. Estate planners believe that Prince’s fortune may shrink in half because he departed without directing his assets into charitable donations, trusts or other tax shelters.

Business owners who oppose the tax say it burdens heirs with generating cash when most of the decedent’s assets are tied up in their operations. The federal tax is due nine months after the death, but probate attorneys say the IRS will let heirs pay over several years.

Fifteen states, including: Minnesota and Washington, D.C., also assess estate taxes; and seven states levy inheritance taxes, according to Kiplinger.com. The website says several states have increased their exemptions in recent years, including Maine, thus reducing the number of people subject to estate tax. Tennessee dropped its tax this year.

However Richard Phillips, a senior policy analyst for Citizens for Tax Justice, said the tax only affects two percent of the wealthiest Americans. He challenged claims that the estate tax threatens small businesses.

“The estate tax is a crucial tool for curbing the worrisome growth in wealth inequality over the past couple decades,” Phillips said via email. “Rather than hurting small business, the estate tax helps ensure that we have the public resources that allow such businesses to flourish.”