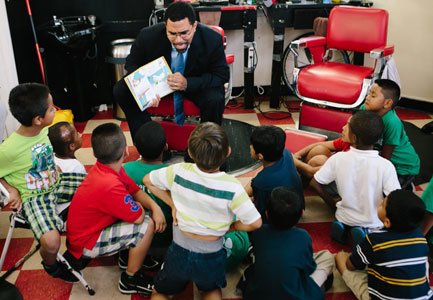 U.S. Secretary of Education John B. King Jr. headlined a Town Hall about Education on Thursday, August 4, 2016, the second day of the National Urban League Conference in Baltimore. (Above) Secretary King is pictured reading and talking to school children. (Courtesy Photo)

The four-day National Urban League Conference at the Baltimore Convention Center had the theme, “Save Our Cities,” and organizers said a chief way to accomplish that goal is through education.

To that end, U.S. Secretary of Education John B. King Jr. headlined a Town Hall on Education on Thursday, August 4, 2016— Day 2 of the conference.

King urged those in attendance to be advocates for changes in education that would provide equal opportunities for all students. It is important that community and other leaders raise their voice to make sure that students have access to quality schools and resources, the only way the new No Child Left Behind Act would work, he said.

“We have to be vigilant to make sure it is not replaced with doing nothing at all,” King said. “We have to make sure that it is replaced by meaningful interventions when schools are struggling.”

Since becoming secretary, King’s supporters say he has brought a commitment to advancing excellence and equity for all students, supporting educators and elevating the teaching profession, and improving college affordability and completion rates.

Prior to being appointed to the position of secretary, King served as principal senior advisor to the Department of Education where he not only carried out the duties of the deputy secretary, but he oversaw all preschool-through-twelfth grade education policies, programs and strategic initiatives, as well as the operations of the department.

His work focused on increasing equity, improving educational outcomes for all students, and closing achievement gaps through implementation of key administration priorities in areas including early learning, elementary and secondary education, special education, English language acquisition and innovation, he said.

During his appearance in Baltimore at the National Urban League conference, King noted there are numerous inequities in access for African-American and Latino students in the country.

While money shouldn’t determine whether an individual receives a good education, it does play a role, and for schools and institutions that lack funds, they must spend wisely, King said.

“Money isn’t everything, we know,” he said. “But, educators must make good choices on where they put their resources,” King said.

There are approximately 1.6 million students who go to schools that have a sworn law enforcement officer, but without a school counselor, King said, quoting from a survey.

Further, African-American students in pre-kindergarten are three times more likely than their white peers to be suspended from school, he said.

Again noting a survey, King said blacks are significantly more likely to attend schools where they cannot take courses in chemistry, calculus or physics. During the past two decades, there has been a re-segregation of schools, which has left many minority and economically disadvantaged students out in the cold and has prevented them from having interaction with white and middle class students, according to King.

“We can change that reality as a result of choices we are making in terms of school and housing opportunities,” King said, noting that school was a place where he always felt safe while growing up. “My teachers gave me a sense of possibility.”