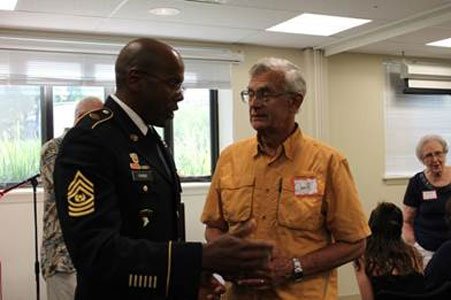 One man served in World War II and the Korean and Vietnam wars. One woman entered the Army Nursing Corps when all four of her brothers entered military service. Another man switched from the Navy to the Air Force to please his new wife.

Each of these Veterans is now represented on the Veterans Tribute Wall which hangs in the Chesapeake Bay Room in the administrative building of Hospice of the Chesapeake’s John & Cathy Belcher Campus in Pasadena. The wall features photos of Veteran patients during their Honor Salutes, a ceremony recognizing and thanking them for their service to our country.

Most moving of all, though, were the words of love and pride that came from the family members who attended the event, as they remembered their loved ones and shared poignant stories of how their parent, sibling or spouse had served. A wonderful moment came when Reginald Saunders’ daughter stood next to her father’s Honor Salute photo. The former British Royal Marines Sergeant was well enough to attend the ceremony, too, and sat with his wife, holding her hand, while his daughter Cathy Bobby lovingly told the tale of his service and love for his bride.

Over and over again the family members shared how important the Honor Salute was to their loved ones. For some, the act seemed as if it were a last rite. More than one family said their Veteran died shortly after the salute was performed.

“We are ever so thankful to the families who shared these stories. We are ever so grateful to the Veterans who have left behind a remarkable legacy,” said Diane Sancilio, Director of Volunteer Services. “With their photos, they live on as ambassadors for our We Honor Veterans program, as we share with the community the important work of Hospice of the Chesapeake professionals and volunteers. It is proof of how committed we are to making every moment count in our patients’ lives.”