After the Justice Department’s report, where are the calls for Baltimore’s mayor to resign? 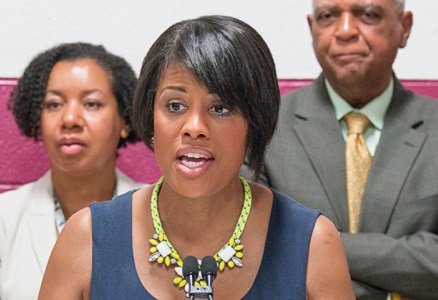 (NNPA) — On Wednesday, the U.S. Department of Justice issued a scathing report on the state of the Baltimore City Police Department (BPD) as a part of its civil rights investigation following the death of Freddie Gray.

The report stated in part, “The Justice Department announced today that it found reasonable cause to believe that the Baltimore City Police Department (BPD) engages in a pattern or practice of conduct that violates the First and Fourth Amendments of the Constitution as well as federal anti-discrimination laws. BPD makes stops, searches and arrests without the required justification; searches and arrests; uses excessive force; and retaliates against individuals for their constitutionally-protected expression. The pattern or practice results from systemic deficiencies that have persisted within BPD for many years and has exacerbated community distrust of the police, particularly in the African-American community. The city and the department have also entered into an agreement in principle to work together, with community input, to create a federal court-enforceable consent decree addressing the deficiencies found during the investigation.”

I have been stunned by the muted reaction by both the Black community and the media.

Let me remind you that at the time of Gray’s death last year, Baltimore had a Black mayor, a Black police chief, a Black prosecutor, a Black president of the city council, a Black congressman and an almost fifty percent Black police force.

Juxtapose that with the death of Michael Brown in Ferguson, Mo., a few years ago. The Justice Department, led by then-Attorney General Eric Holder, went to Ferguson and did a similar investigation and found identical results to Baltimore. The Ferguson reports are very similar to the report issued about the Baltimore Police Department.

The media narrative about Ferguson was that the police force was racist. White cop kills unarmed Black man. According to the 2010 U.S. Census, Blacks make up roughly 70 percent of the population in Ferguson and more than 20 percent live in poverty. When Michael Brown was shot and killed in Ferguson, the mayor was White, there was only one Black on the six-member city council (.096 percent) and only three Blacks out of 53 policemen (5.6 percent) and was listed as the sixth most segregated city in the U.S.

The NAACP’s president and CEO, Cornell Brooks basically copied and pasted the statement he issued after the Ferguson reports and reused it for the Baltimore report.

The NAACP is “supposed” to be the nation’s premier civil rights organization, but time after time they have been shown to be huge hypocrites. Upon the Justice Department’s release of their damning report on Ferguson last year, Brooks said to CNN’s Wolf Blitzer, “the mayor needs to resign.”

Strangely enough, Brooks never called for the resignation of the Mayor of Baltimore Stephanie Rawlings-Blake, who is a Black Democrat.

I am really trying hard to understand what is going on here. Ferguson and Baltimore were both run from top to bottom by Democrats, both cities had an unarmed Black male killed at the hands of their police and both cities erupted in violence after the incidents. The Justice Department came to the same conclusion about both cities: that the cities and their police forces were incompetently run and employed policemen who violated a plethora of federal and civil rights laws.