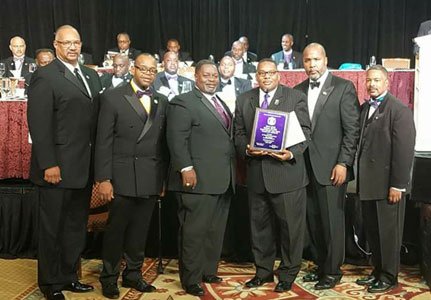 LAS VEGAS — At the 80th Grand Conclave of the Omega Psi Phi Fraternity, Inc., which was held July 21- 28, 2016 in Las Vegas, Pi Omega Chapter, Graduate Chapter of Baltimore was once again recognized for its service to the community.

Under the director of C. Donald Bowser, Basileus of Pi Omega Chapter, Dwayne White and John Berkley, Social Action chairman and co-chairman respectfully, continued to engage the members in a variety of activities that fit in with the strengths of the chapter. All members of the chapter were involved in the activities during the year, truly making this a chapter award. The Pi Omega Que-ettes were also a great help to the chapter during this time. The true winners are the hundreds of people locally, nationally, and internationally, who benefited from the services and programs offered by the chapter and Omega men throughout the world. Well done is truly better than well said.

Omega Psi Phi Fraternity is a historically black fraternal organization, which provides and promotes programs of social, cultural and economic uplift to the communities we serve. For over a century, we have recruited, trained and deployed men of color for leadership roles in service to humanity.

Pi Omega is a graduate chapter of Omega Psi Phi Fraternity, Inc. Pi Omega Chapter has been instrumental in sponsoring programs that foster achievement, scholarship, community action, and the search for talent. For over 90 years, Pi Omega has contributed to various organizations, programs, and schools, which serve as valuable resources to the Baltimore community. We continue to grow and serve the community in the name of Manhood, Scholarship, Perseverance, and Uplift.