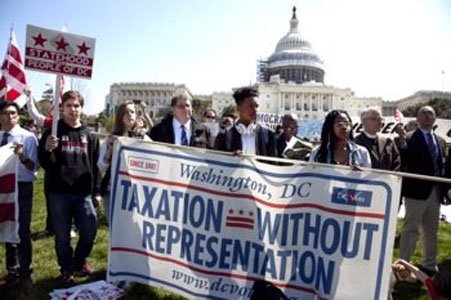 The issue of whether the District of Columbia (D.C.) will become the United States’ 51st state has been brewing for a long time.

(NNPA) — Special from The Washington Informer

The issue of whether the District of Columbia (D.C.) will become the United States’ 51st state has been brewing for a long time, and the lack of voting power within Congress has many residents, city officials and presidential candidates saying the time is right for officially lobbying to make the District a state.

As the nation’s capital, the District of Columbia is a federal district under the direct jurisdiction of Congress, despite being more populous than some states. However, without statehood, D.C. lacks representation in Congress and full control over local laws and affairs, which Congress typically does not have jurisdiction over in any other U.S. city or state.

The District of Columbia does choose a nonvoting delegate— currently Eleanor Holmes Norton— but they are largely symbolic since they have no voting power in the legislative chambers. Nevertheless, the District still have to pay federal taxes and have little to no say in the legislative body that sets tax rates, hence the “taxation without representation” mantra.

Norton told The Informer that she believes District residents should have full and equal rights.

“The District should become a state because there is no other way for the residents of the nation’s capital to enjoy full and equal rights with other American citizens, free from undemocratic interference by the Congress of the United States,” Norton said. “Just like every other [Congress] member, I can vote in committee and can introduce and cosponsor legislation, but I do not have the right to express the views of my constituents by voting on the floor of the U.S. House of Representatives, even on matters unique to the District of Columbia.

“I have been able to establish relationships with senators and we have many Senate allies, but like other Americans, District residents deserve full voting rights in the Senate, as well as the House,” Norton said.

The District of Columbia is more populous than two states, Vermont and Wyoming, which have full voting representation in Congress with two senators and one House representative. The District also pays more federal taxes than 22 other states.

City residents have limited say in who will be in the president’s cabinet, the head any federal agency, or on any federal court, since the decision is ultimately up to the Senate— in which District delegates have no voting power— to approve those appointments.

Being granted statehood would allow D.C. to set its own laws and budgets without Congressional approval, like any other city or state. Several local laws for marijuana policy, gun control and combating HIV/AIDS have been held up due to lack of approval from Congress.

Some detractors argue that the District of Columbia shouldn’t be a state since the Founding Fathers have always meant for it to be under federal control. The Constitution’s Article I states: “The Congress shall have Power … To exercise exclusive Legislation in all Cases whatsoever, over such District (not exceeding ten Miles square) as may, by Cession of particular States, and the Acceptance of Congress, become the Seat of the Government of the United States.”