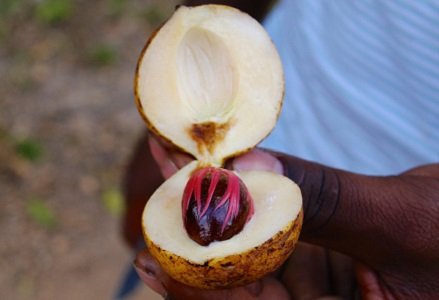 Zanzibar has a spice trade dating back to the 16th century, but today tourism is one of its main industries. Aben Rehan, from Mambo Poa Tours, cracks open a nutmeg seed. (Credit: Micah Spangler)

The van turns off the main road and speeds down a dirt path shrouded in vegetation.

"That's where we are going! Hakuna Matata Spice Farm!" shouts my tour guide Aben Rehan, gripping the wheel and laughing as he repeats the Swahili phrase made famous by the 1994 Disney film.

I've been in Zanzibar for less than a day but have already heard "Hakuna Matata" -- meaning "no worries" -- yelled at me several times over.

I've quickly come to interpret the refrain as a local code word for, "Hey foreigner, come buy this thing."

But as the van comes to a stop at the entrance of the spice farm, there are no crowds of tourists, no pushy souvenir sellers. I am, as far as I can tell, the only person there.

A man named Haji introduces himself and his assistant -- a 15-year-old boy with a sharp knife sticking out of his back pocket.

Spices have long been a pillar of Zanzibar's trade-heavy economy.

Zanzibar City, with its UNESCO-listed historic center Stone Town, is the heart of this Indian Ocean archipelago, positioned 25 miles east of the Tanzanian mainland.

The Portuguese and Chinese introduced spices such as garlic, cacao and chili to the islands several centuries ago.

But it was the Omani Sultan Seyyid Said -- upon moving the capital of his empire Stone Town in 1840 -- who fully exploited the potential of Zanzibar's tropical climate and incredibly fertile soil.

The Sultan mandated the establishment of clove plantations on both public and private lands and forced Zanzibar's slave population to grow and harvest the crops, fashioning the less than 1,000-square-mile archipelago into the world's single largest cloves producer.

Cloves were traded like gold at the time -- a staple prized not only for taste but as a common method of curing and preserving meats long before the advent of the refrigerator.

Today, however, Zanzibar is an economy in transition.

While cloves remain the archipelago's leading domestic product, its production numbers have been surpassed by other mega-suppliers such as Indonesia and Madagascar.

Zanzibar, as a result, has capitalized on its history as the world's "Spice Islands" -- a title also claimed by Indonesia's Maluku archipelago -- to become a popular destination for eco-tourists and food fans alike.

In a vacationer's paradise famous for World Heritage-standard Swahili architecture, near-perfect kite surfing conditions, and a 45-seat restaurant perched on top of a sea-bound rock, spice farms like Hakuna Matata top the list of Zanzibar attractions.

And there's a good reason for that.

The Hakuna Matata spice farm is in Dole village, about nine miles northeast of Stone Town.

Over the next two hours Haji guides me through the farm's thick maze of trees, bushes, and fragrant vines including vanilla, ginger, black pepper, turmeric, cinnamon, lemongrass, and more.

While it's clear the farm's main product is tours not exports, nothing about the experience feels artificial.

Each spice comes with its own story -- how it arrived on the island and an explanation of its uses, both common and uncommon.

"A lady takes this and the shyness goes away," Haji says as he cracks a nutmeg seed and displayed the red-veined fruit inside. "Shininess?" I ask, mishearing the word.

"Shyness but just for the lady. She takes it when she wants to celebrate some way ... or wants to have a big family. This is like Viagra for her," he explains plainly. "You get it?"

As the tour comes to an end, Haji presents me with a delicious traditional meal prepared with many of the spices we have seen over the course of the afternoon, including clove-infused rice, creamed spinach, and pickled onions and tomatoes topped with biryani sauce.

"Eat as much as you want," Aben says, joining us on a plastic mat spread across the ground. "This is all for you!"

As we finish our meal, locals sit around trading jokes and fashioning hats out of bamboo leaves.

A few others further in the bush sing a song in Swahili, the only part of which I understand is the chorus line of "Hakuna Matata."

Now, the mantra strikes me as joyous. No longer an urgent plea, its smooth rhythms meant "no worries" and nothing else.

A spice tour is one of the most popular attractions in Zanzibar and, as a result, there's a surplus of companies to choose from when planning your visit.

However, the difference between good tour companies and bad is readily apparent, says Aben Rehan, from Jambiani-based Mambo Poa Tours.

"We have big [tour] companies and they have many, many weaknesses. They choose inexperienced guides that have a lack of information but people don't know."

"This place is full of natural beauty, so whichever environment visitors face, they will like. Even if staff are crazy."

In other words, it's easy to let Zanzibar's lush surroundings convince you you're getting a good tour when you really aren't.

It's best to look for a company that's going to provide the added history and context that will make your trip extra-special.

A private tour with Mambo Poa Tours costs $30, including transportation and lunch. The price of a shared tour is $20 per person.

Micah Spangler is a freelance journalist based in Washington, DC. His work has appeared in CNN, The Daily Beast, VICE, Maxim, The Week, and more.