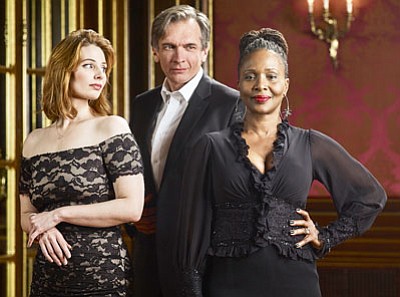 BALTIMORE — The city’s biggest professional theater company, Center Stage, has entered the homestretch in its yearlong $32 million renovation, the most extensive in the 150-year-old building’s history.

As the remodel, which will result in more public areas, meeting spaces and a 99-seat theater among other amenities approaches its conclusion, the famed Mount Vernon hotspot will play host to “Les Liaisons Dangereuses,” a play based on the 1782 novel by Pierre Choderlos de Laclos about two French aristocrats, the Marquise de Merteuil and her ex-lover, the Vicomte de Valmont, who challenge each other to seduce unsuspecting innocents in a story of revenge, debauchery and hidden motives.

“I … think this play challenges the concepts of power and gender and what we believe about sex. It’s exciting to kick off the season with a female protagonist who is an intellectual giant – who gets to be deliciously manipulative and evil,” said Hana Sharif, the show’s director.

“I’ve been talking about the play as a clash of titans or a game of gods between Merteuil and Valmont. These two figures are deeply flawed people. They are all at once magnetic and irresistible and dangerous in every way,” said Sharif, who’s also the associate artistic director at Center Stage.

The story is set at a moment that is right on the cusp of the French Revolution, a time when there had been no greater divide between the haves and the have-nots, the aristocracy and the common man, according to Sharif.

“But, inside the world of the play, people feel very isolated from the poverty and the dangers of a world on edge. And that resonated with me in 2016,” she said. “Anywhere you look in the world today, it feels like we’re just the razor’s edge away from World War III, but part of the insulation and the privilege of the life that most of us live is that we can pretend as if that’s not really the case, because it doesn’t necessarily influence our day-to-day life.”

Audiences attending the play might be dazzled by the lush costumes from the Marie Antoinette-period of France, which include luxurious and daring necklines.

As for the renovations, Michael Ross, the managing director at Center Stage says they are right on schedule for an exciting March 3, 2017, Grand Re-opening.

“For now, we’re happy to be bringing audiences safely and intriguingly through our renovations to present our production of ‘Les Liaisons Dangereuses’ in our Pearlstone Theater,” Ross said. “This is a truly transformational renovation of Center Stage. Our spaces will look and feel completely different. The public spaces will be much more open and inviting. Our Head Theater on the fourth floor is being completely redesigned, and we’re adding a new 99-seat space – The Third Space – to be able to produce works for younger audiences, as well as more family programming.”

Now, Center Stage will have a brand-new education center called the Eddie C. and C. Sylvia Brown Education Center, which will allow for an expansion of its educational programming, Ross said.

Additionally, the new Terry H. Morganthaler Costume Shop will be a great addition for the costume team; and the new Sherman Café and Bar will be a place for patrons to gather before and after performances, he said.

“The renovation will help us create a welcoming environment for everyone who enters our theater doors. In addition to our Mainstage, Off Center and Family Series productions, Center Stage ignites conversations among a global audience through our digital initiatives, which explore how technology and the arts intersect,” Ross said.

“The theater also nurtures the next generation of artists and theater-goers through the Young Playwrights Festival, Student Matinee Series and many other educational programs for students, families and professionals.”