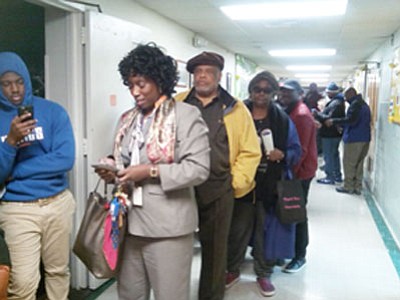 The lines were long throughout the day as NAACP members voted for local chapter president on Tuesday, November 22, 2016 Deborah Bailey

BALTIMORE — Tessa Hill-Aston remains president of the Baltimore Chapter of the NAACP for a fourth term after beating back rival Cortley C.D. Weatherspoon in the branch’s most closely watched election in a generation.

Earlier this month, lines were long at the Forest Park Senior Center as more than 600 NAACP members cast votes and filled the center throughout the day. By the 7 p.m. the cut off time for voters to arrive, members spilled out the doors with the last voters patiently waiting almost two hours to participate in what has been called an historic election.

“This is a fantastic turnout. I’ve been an NAACP member all my life and I’m 70. I’ve not seen this kind of turnout very often for a local chapter election. This is important,” said lifetime NAACP member Dora Lee Bacote, as she viewed the line stretched out behind her.

“She supports what veterans do. Baltimore has the only active Veteran’s Affairs program in the NAACP. I just think that she is the better candidate,” said Darrell N. Truesdale, Sr., Baltimore District Commander of American Legion Post 294.

“With the election of Donald Trump as president, Baltimore needs to have very strong leadership and activism. It’s time to pass the baton.”

Hill-Aston successfully rallied her supporters with the message that she was not finished with the agenda that originally swept her to victory in 2010. The Baltimore Chapter will host the NAACP’s national 2017 convention and Hill-Aston believed it was important to remain at the helm and ensure Baltimore benefits.

“Three years ago, I won a bid for the NAACP National Convention. The host city chapter puts the juice and muscle into the convention at the local level,” Hill-Aston said. “This is a free event for Baltimoreans and an excellent opportunity for our city’s entrepreneurs. I want thousands of Baltimore citizens to get involved.”

Hill-Aston admitted that many of the successes of the Baltimore Chapter have been quiet ones.

“The branch is getting work done on a grass-roots level. We help people with evictions; we help people who have been in jail and need a fresh start,” Hill-Aston said. “When the NAACP gets involved with inmates who are not getting medical attention they get help. We help the homeless find housing; we help those with nowhere else to turn and get results.”

Hill-Aston is the first woman to serve as president of the Baltimore Chapter since Enolia McMillan, who served from 1969 to 1984. McMillan went on to become the first female President of the National NAACP.