Record number of African Americans will now serve in Congress 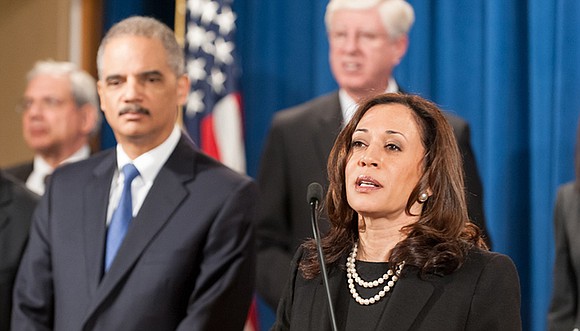 California Attorney General Kamala Harris is set to become the second African American woman to serve in the U.S. Senate. This photo was taken during a press conference at the U.S. Justice Department on February 5, 2013. Lonnie Tague/Justice Department

Kamala Harris of California will be the second African American woman to serve in the U.S. Senate. Former Maryland Lt. Governor Anthony Brown will serve in the U.S. House of Representatives. Both Republicans in the House, Mia Love (R-Utah) and Will Hurd (R-Texas) won re-election, as did the only Black Republican in the Senate, Tim Scott (R-S.C.).

Though there will be more African American members serving in Congress, the dilemma they find themselves in is obvious: All but three are Democrats who will be serving in the minority in the House and Senate. Being a member of the minority party in the House is one of the most powerless positions in Congress. It's the majority that sets the agenda, the hearing schedules, the floor schedule and when the Congress will be in recess.

The Senate is different. The two African American Democrats who will serve next year, Senator-elect Harris and Sen. Cory Booker (D-N.J.) could have some opportunities to influence the agenda moving forward. The Senate will be a narrower 52-48, and the rules allow for some disruption from members of the minority party.

However, it won't be easy. Currently members of the Democratic leadership in both the House and the Senate are in a period stunned silence and are not even harping on the fact that Hillary Clinton won more votes than Trump and therefore no Trump has no real mandate.

The Democratic Party in recent years has not been anywhere as militant as the rightwing, who created the so-called Tea Party movement and the "alt-right" to deal with the growing influence of African Americans and Latinos at the ballot box.

Democrats in Congress are primed for a new set of younger leaders to take the place of those who are in their mid-70s and who have failed strategically to win over voters in a country where Democrats are in the majority.

That the Democrats had two candidates over the age of 68 running for the presidency as Republicans fielded a candidate in his mid-40s is a sign it's time for younger and more dynamic leadership on the left side of the aisle. One of those young leaders could come out of the Congressional Black Caucus, who is soon to elect a new caucus chair.

Lauren Victoria Burke is a political analyst who speaks on politics and African American leadership. She can be contacted at LBurke007@gmail.com and on Twitter at @LVBurke.