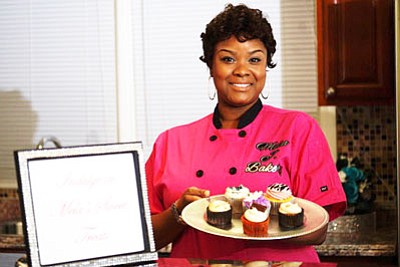 BALTIMORE — Tyreece Johnson recalled the delicious smells that would fill the air on Saturday mornings.

“My mother ran a small in-house bakery, and would bake pineapple upside cakes, strawberry shortcakes, pies from scratch and other homemade desserts,” recalled Johnson. “My mother also made wedding cakes. It was nice to wake up and smell my mother cooking those cakes and pies. It was wonderful. I try to incorporate that same homemade taste and feeling in my cupcakes.”

Johnson is the owner and operator of Mela T Bakery, which she describes as a “Cupcakery.” Mela T. Bakery specializes in uniquely flavored and designed cupcakes.

“I re-invented some of my mother’s same classic cake recipes, and combined that with my love for beautiful designs and colors,” said Johnson. “I wanted to keep the [authenticity] of what I remember growing up. I also wanted to step outside the box.”

The company offers a wide variety of cupcakes, which fall under one of the following categories: Classic, Premium, Signature, Cocktail and Seasonal. Classic Vanilla with Buttercream; Premium Pink Lemonade; Premium Red Velvet; Signature Pineapple Upside Down; Signature Peaches and Cream; and Signature Butter Rum are among the wide variety.

Seasonal flavors include Sweet Potato, Pumpkin, and Apple Spice cupcakes, which were made especially for the Thanksgiving holiday. With the football season in high gear, Mela T Bakery’s Ravens cupcakes have been a ‘hit’ for Ravens fans, with the tasty desserts coming adorned in edible jerseys and footballs.

“Everyone loves a good cupcake,” said Johnson. “But we also plan to extend our cupcake offerings to include healthier alternatives.”

“I was asked to make cupcakes for a barbeque,” said Johnson. “Everyone loved them and starting asking me for my business card. The demand for my cupcakes became so great that I decided to start my own business.”

Mela T. Bakery, whose name Johnson says is derived from her nickname “Melody,” has been in business since May 2013. According to Johnson, the company has steadily grown, with the bulk of the company’s orders being birthday cupcakes for kids and teenagers.

“I offer delicious, homemade cupcakes, but I am big on branding,” she said. “Branding is important when it comes to building a business or empire. I also put a lot of time into packaging, which includes information inside the packaging on how to store the cupcakes. I am also big on follow-up, so we place follow-up phone calls. We want people to remember us.”

My mother helps me with the prep, especially with the large orders,” said Johnson. “She also helps me on the administrative side. I also have a few assistants, which include my sister Ashley.”

Johnson, 36, is a native of Baltimore. She graduated from Milford Mill Academy, and attended UMUC (University of Maryland University College). The future looks “sweet” for Johnson.

“Business has been very good,” she said. “My ultimate goal is for Mela T Bakery to have a storefront. We also want to get our cupcakes into a major food retailer.”

She added, “Everyone feels their product is the best. Anyone can Google ‘How to make a cupcake.’ But my cupcakes are made from my very own scratch ingredients and personal designs. I wanted to create a cupcake experience that people could eat with their hands, but taste with their soul.”

The company can be found on Facebook under Mela T Bakery & Events. For more information visit melatbakery.wixsite.com.