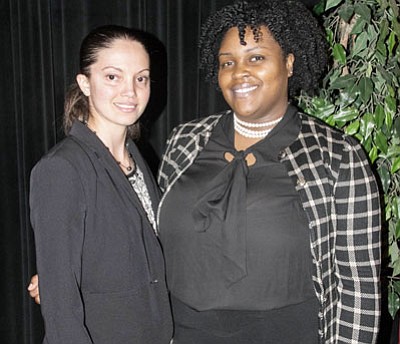 Kirenia Sera-Viguera (left) enrolled as a STEM Scholar at BCCC and has become an accomplished student of architecture at Morgan State University and Brittany Young (right) who struggled during her first year at the University of Maryland enrolled at BCCC and is now well on the road to success. Melvin Frooks/BCCC

BALTIMORE — West Baltimore native and Baltimore Polytechnic Institute graduate Brittany Young struggled during her first year of college at the University of Maryland but that didn’t keep her from participating in the science, technology, engineering and math (STEM) revolution and becoming a leader in her field.

Kirenia Sera-Viguera grew up in Cuba and had to learn English from scratch, but she tapped into math and science to garner one of the top 10 spots in her graduating class at Patterson High School, enroll as a STEM Scholar at Baltimore City Community College (BCCC) and become an accomplished student of architecture at Morgan State University.

Shalini Malaki earned her associate’s degree in biotechnology at BCCC and a bachelor of science degree in medical and research technology at the University of Maryland Baltimore before attaining her master’s in public policy from Georgetown University. She has conducted virology research in hopes of stopping a deadly form of typhoid fever in her native country of Nigeria.

Young, Sera-Viguera, and Malaki couldn’t have hailed from more different circumstances or places. Yet, their unlikely paths would cross for a brief moment at BCCC’s supercharged math and science cohort.

The three united again on Saturday, November 12, 2016 for BCCC’s 4th annual STEM Community Day, a host venue for the second statewide Maryland STEM Festival. The three-hour event included a panel discussion on which they were invited to share their experiences and success.

So what’s it like to be a woman in this very male-dominated field?

“People’s expectations are we’re not a good fit,” Brittany said of her experience with being a woman in a male-dominated field. But to her, the terrain is not unfamiliar. “I had people telling me I couldn’t do stuff since I was in first grade. If I let that discourage me, I would have dropped out of the University of Maryland.”

The first year of college was tough for Brittany. She ended up with a 1.1 GPA at College Park. But she enrolled at BCCC and proceeded to do some amazing things: internships and job experiences at McCormick & Co., NASA and the Johns Hopkins University Applied Physics Laboratory. She had the opportunity to conduct satellite and planetary research. In fact, she was the intern who discovered the Mickey Mouse feature on the planet Mercury.

The story was the subject of a Jeanne Moos TV report on CNN and made major media around the world. Today, she has come full circle, working to bring STEM concepts to the dirt bike culture in Baltimore for creative applications, video games and other resources local bikers might find interesting. She hopes her work will contribute to increase interest in pursuing STEM careers among young people West Baltimore.

“English was not my first language so that was a big challenge,” Kirenia said. “But I got through that because my real interest was math and science. I think the biggest thing is time management. That’s very important to my success.”

Kirenia finds herself constantly engaged by her study program at Morgan State to produce architectural models and recommendations using actual parcels of land slated for development. She even acquires old houses as investments with her father, the interiors of which she completely demos and remodels. She knows how to remediate lead paint in old houses and sometimes does this for charity. All in all, it has made for a busy life.