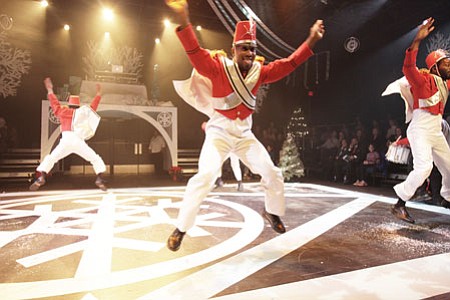 Step into the holiday season with an evening at the Meyerhoff Symphony Hall between Friday, December 9 and Sunday, December 11, 2016. The Baltimore Symphony Orchestra (BSO) and Step Afrika! have collaborated to present the world premiere of Swingin’ Nutcracker à la Ellington, an energetic holiday performance combining music, dance and a unique cultural twist on the traditional Nutcracker story. Courtesy Photo/BSO

BALTIMORE — Start your holiday season with an evening at the Meyerhoff Symphony Hall between Friday, December 9 and Sunday, December 11, 2016. The Baltimore Symphony Orchestra (BSO) and Step Afrika! have collaborated to present the world premiere of Swingin’ Nutcracker à la Ellington, an energetic holiday performance combining music, dance and a unique cultural twist on the traditional Nutcracker story. (StepAfrika will also perform at the Strathmore on Thursday, December 8, 2016).

The BSO will perform Duke Ellington’s jazz transformation of Tchaikovsky’s Nutcracker Suite as the internationally acclaimed Step Afrika! Dance Ensemble interprets the journey of a young Duke Ellington from 1920s Washington, DC to international acclaim in the 1960’s through the medium of dance.

“This collaboration is our biggest performance ever with a full orchestra and a jazz ensemble all on the stage at the same time. I’m really looking forward to seeing how these two artistic cultures will be merged,” said C. Brian Wilson, founder and executive director of Step Afrika! “We’re telling a very different story of the Nutcracker. We’re going to look at Duke Ellington’s story as a young boy growing up in 1920s Washington D.C. and the road he traveled to become one our country’s and community’s most celebrated performers.”

“The artistic and operations staff of Step Afrika! and the BSO have been working together for months on the production design,” McBride Robles said. “All of us are excited to see these plans come to fruition in the world premiere next week.”

Bowie State University graduate, Reginald Barrington is proud to represent his hometown region in the upcoming Nutcracker à la Ellington performance. Dancing professionally is a dream come true that Barrington now uses to inspire other young people to pursue their own dreams.

“I started stepping in Eleanor Roosevelt High School in Greenbelt, Maryland. I came back to coach my high school step team for three years and continued my love and passion for stepping and dancing as a member of Phi Beta Sigma Fraternity, Inc.,” said Barrington, recounting his step-dancing journey. “Eventually I found out about an awesome opportunity to join a professional dance company, Step Afrika! Now I’ve been able to tour the world and travel, teach and inspire. I would have never thought that I would be dancing and stepping as a profession.”

Step Afrika! is the nation’s first professional dance company dedicated to the art form of “stepping” a staccato dance style originated from African-American Greek-letter organizations. The whole body is used as an instrument through rhythmic clapping, song and body-foot motions, reminiscent of the African gum-boot dance, according to Elizabeth Fine, author of “Soulstepping: African American Step Shows.”

Step Afrika! has toured more than 70 countries and ranks as one of the top ten African-American dance companies in the United States. The company blends step dance with traditional African dance and other contemporary dance forms into a cohesive artistic expression, accrding to Wilson.

Robles pointed out that Nutcracker à la Ellington is the forward-thinking collaboration for which the Baltimore Symphony Orchestra is known. The BSO is recognized as one of America’s leading innovative orchestras and is among Maryland’s signature artistic institutions.

Tickets for all performances range from $25 - $60; children 12 and under are half price. For more information, performance schedule and tickets for Nutcracker a’ la Ellington, visit: BSOmusic.org.