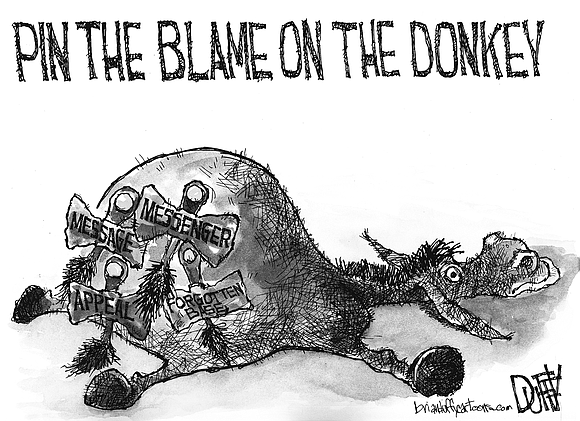 BALTIMORE — I am perturbed that Hillary Clinton and her campaign staff are blaming FBI Director James Comey for Clinton’s election defeat. Director Comey sent out a letter to Congress 11 days prior to the election reopening the investigation into Clinton’s emails.

Two days prior to the election he stated there was nothing incriminating in the emails, and he was closing out the investigation. They claim he adversely impacted her momentum a week before the election, which is probably true.

However, Director Comey should not be scapegoated for Clinton’s loss, because there are many reasons she lost the election.

I think the primary reason Clinton lost was serious mistakes made by her campaign staff. They didn’t learn from the big mistake of the 2008 Democratic primary when they decided not to campaign in Iowa, and Obama took Iowa, which catapulted him to a primary victory.

Fast forward to 2016. They didn’t campaign in Wisconsin and had minimal campaigning in Michigan. They took Pennsylvania for granted and didn’t realize it was in play until just before the election.

President Obama, while trying to promote his legacy, helped Clinton lose Florida by reestablishing relations with Cuba. This alienated the large Cuban-American population in Florida and probably was a major factor in Clinton losing the election in a key battleground state.

Wellesley College, Clinton’s alma mater, hosted a Clinton victory party the night of the election attended by 3,000 alumnae who descended on the party from all over the country and some parts of the world. Did they all vote in the election? Maybe they should have been out campaigning in the battleground states.

Donald Trump heavily campaigned in all the battleground states, and they provided his victory.

The campaign staff had an arrogant attitude and did not seek outside help or counsel. The DNC staff said they tried to provide advice but were rebuffed by Clinton’s staff every time. They even ignored Bill Clinton’s request to campaign more in the critical states of Wisconsin, Michigan and Pennsylvania. Clinton and her staff alienated Sander’s supporters and I am sure some of the Sander’s democrats did not vote for Clinton and might have stayed home or they voted for third party candidates.

The third party candidates Johnson, Stein and others garnered around four to six percent in many states, which made the difference in the key states of Wisconsin, Michigan and Pennsylvania.

All of the major polls, except for the Los Angeles Times poll, had Clinton winning the election. This probably contributed to a lower turnout for Clinton because her supporters believed in the inevitability of her election and did not consider their votes would make a difference. This might have given Clinton’s campaign staff a false sense of inevitable victory.

Clinton was not able to energize the black and Hispanic vote that helped elect Barack Obama when he was elected President. Their turnout was down approximately five to 10 percent in a number of battleground states.

Finally, Trump and his campaign staff did a great job in recognizing the discontent among voters, and directed their campaign towards people who believe they have been disenfranchised over the past eight years of the Obama administration, and Clinton was painted as an extension of Obama and his policies. The Obama administration has been hesitant to fully commit to the destruction of ISIS, which has emboldened Islamic terrorists in the world to conduct terrorist attacks.

Also, Obama has not secured our border with Mexico, and he wants to bring in tens of thousands of immigrants from the Middle East who could harbor infiltrating terrorists.

Clinton and her campaign staff should recognize their ineptness and arrogance and not blame others for their incompetence.

The preceding analysis emanates from the view of a registered Independent of many years— undeclared in New Hampshire.

Donald Moskowitz is a former AG2 and LT. with the United States Navy. He is a resides in Londonderry, New Hampshire.