Baltimore Ravens have a score to settle with New England Patriots 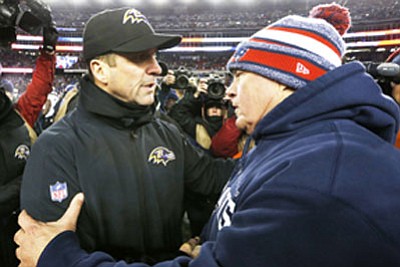 BALTIMORE — The Baltimore Ravens face a New England Patriots team that has become a rival despite not being in the same division. The two teams have met three times in the playoffs with the winner of becoming the eventual Super Bowl champion twice.

John Harbaugh is looking forward to the match-up with Tom Brady, Bill Belichick and the rest of the Patriots.

“There’s a lot of respect for New England," Harbaugh said at his Monday press conference. "Obviously, a lot of respect for coach [Bill] Belichick and for Tom Brady and all of those players. A guy like Rob Ninkovich comes immediately to mind. They’ve just got … Julian Edelman … You can name them. They have great players. They have a great organization. They do a great job, obviously, year-in and year out, because they’re always at the top, and they’ve earned it."

The games against the Patriots are always one of the featured match-ups in the NFL. That is no different this year, as the schedule makers have pegged the game as one of the late season match-ups of the week.

The Ravens will visit Gillette Stadium in Foxboro to square off against the Patriots on Monday Night Football— Monday, December 12, 2016.

As one of the most successful organizations in the NFL, the Patriots have become a measuring stick for other teams. Harbaugh realizes that and views this week as a GPS game for the Ravens.

Harbaugh says he is honored to coach in a game like this, which is a big challenge. He feels his team will be ready to prove that they belong among the elite teams in the AFC.

The last time the two teams played each other was in the 2015 Divisional Playoffs and New England beat the Ravens 35 - 31.

The Ravens have a special score to settle when they play the Patriots. Harbaugh and the Ravens coaching staff felt that Bill Belichick stretched the rules when they made an ineligible to be a receiver, appear to be an option for Tom Brady to throw too.

Shane Vereen had been one of the top receiving threats for New England in 2015. He served as a decoy. Vereen was rendered ineligible on the play, but the Patriots had him backpedal when the ball was snapped as if he was going to be featured on a screen pass.

Baltimore didn't know they had to guard Michael Hoomanawanui who reported in the game as a tackle eligible. He lined up at left tackle and ran a seam route. The tight end recorded four catches for 43 yards against the Ravens.

Ironically, the Ravens used the same play against the Raiders the following year. Crockett Gilmore was the disguised player while Marshall Yanda was the decoy.

The Patriots lead the all-time series 9 - 3. This year, New England will be without their best weapon— tight end Rob Gronkowski who was placed on injured reserve last week and is out for the rest of the season.