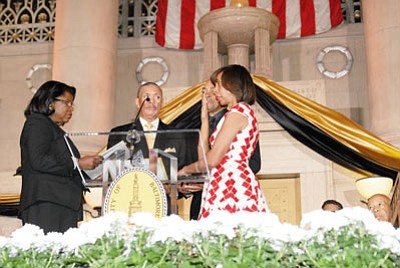 Catherine Pugh was sworn in as Baltimore City’s 50th mayor on Tuesday, December 6, 2016 at the War Memorial Building on Gay Street in Baltimore. Gar Roberts

continued — She added, “I represent a major area, which is Park Heights, and she is the first mayor since my tenure that has specifically talked about the needs of Park Heights, and has worked for improvement. I am so elated that she is a mayor that has focused on housing. The city has acquired over 15,000 homes in the city, and a number of those are in Park Heights. I look forward to working with her, and for getting development going in Park Heights.”

Robert Stokes, Sr. is among the many new faces on the Baltimore City Council, and represents the city’s 12th district.

“The City Council, the state legislators, and the new mayor, have a lot of work to do,” said Councilman Stokes. “But we have to work together to tackle some of the ills we have here in Baltimore City like crime and unemployment. I look forward to working with Mayor Pugh. We have a great working relationship, and the same vision. I have confidence in her.”

Mayor Pugh has been a public servant for over 15 years. She served as a member of the Baltimore City Council, representing the 4th district.

In 2005, she was appointed to the Maryland General Assembly, House of Delegates, where she served for one year before running for her Senate seat in 2006. Mayor Pugh holds an MBA from Morgan State University and has received qualification from the University of California as an Economic Development Specialist.