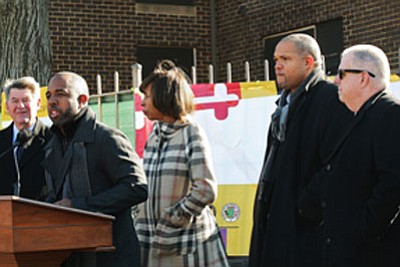 On Friday, December 9, 2016, Governor Larry Hogan announced awardees for demolition funds through Project C.O.R.E., or Creating Opportunities for Renewal and Enterprise, a multi-year city-state partnership to demolish vacant and derelict buildings in Baltimore and replace them with green space or create the foundation for redevelopment in Baltimore City. The governor was joined by Baltimore City Mayor Catherine E. Pugh and Department of Housing and Community Development (DHCD) Secretary Kenneth C. Holt, as well as Baltimore City officials and community stakeholders at the demolition site in West Baltimore. The demolition site, which is the former Madison Park North apartments, is the first of more than 200 units that will be demolished as part of this project. It will serve as the future site of an Innovation Center in West Baltimore – a hub for the city’s first designated “innovation district.” (Left to right): Department of Housing and Community Development (DHCD) Secretary Kenneth C. Holt; Richard May, founder of Mount Royal Community Development Corporation and chairman of Innovation Village; Mayor Catherine E. Pugh; awardee P. David Bramble, managing partner at MCB Real Estate; and Governor Larry Hogan. Dennis Roberts

BALTIMORE — When Governor Larry Hogan and Baltimore Mayor Catherine Pugh joined a host of other dignitaries and officials on Friday, December 9, 2016 to announce a multimillion, redevelopment plan for Madison Park North in West Baltimore’s Reservoir Hill, those working on the project were taken by more than just the dollar signs attached and the media attention the design brought.

For P. David Bramble, Richard May and Adrian Harpool, the personal and sentimental value far outweighs the cost, benefits and any financial gain they might receive from the planned demolition and construction of a mixed-use sight in west Baltimore.

“I’m super excited about this because I don’t do a lot in Baltimore, but this is my neighborhood,” said Bramble, the managing partner at the Baltimore-based MCB Real Estate whose portfolio includes the former PEMCO property in East Baltimore.

The demolition of the Madison Park North Apartments, which along with the planned new construction is being conducted by MCB, is a process that will take several months to complete as it involves asbestos removal and the recycling of brick and concrete, according to Bramble.

“It’s a process, and once the demolition is done and construction begins, it’ll be another 18 to 24 months before things are completed,” he said, noting that the construction will be done in multiple phases.

Once completed, the neighborhood will be home to a new town center that will include a grocery store, restaurant, retail shops, medical and office space and 300 to 500 apartments.

Governor Hogan says the project will provide an anchor for a $16 million innovation swath of Baltimore that runs from Coppin State University to MICA and north from Mondawmin Mall to King Boulevard.

The governor said it would leverage an additional $285 million in private-sector money in 10 different neighborhoods to “really amp up the transformation and redevelopment of this city.”

The project also reportedly includes the $31 million renovation underway for the John Eager Howard School where, across the street, a planned 50,000-square-foot innovation village will provide space for new and existing companies with job-training opportunities.

“We believe the Madison Park North redevelopment represents a transformational opportunity for the surrounding communities to connect residents to jobs as well as provide much needed amenities and neighborhood level retail for the area. West Baltimore is a food desert, retail desert, and lacks jobs for residents,” said Richard May, the founder of Mount Royal Community Development Corporation and chairman of Innovation Village, a community partnership aimed at leveraging technology to help fuel a wave of job creation and business startups to support retail and new housing developments.

“We have already started connecting minority and women-owned enterprises to the construction related opportunities for this project and are also identifying residents in West Baltimore looking for construction jobs on the site,” May said.

Ultimately, the project is anticipated to provide a significant number of construction and permanent jobs as well as become a home to entrepreneurs growing new businesses in the community, he said.

“Over the past 18 months, the Neighborhood Coalition for Madison Park North Redevelopment has organized seven different neighborhoods surround the site to provide a platform for communities to determine our collective needs,” May said.

The project conceivably could lead to creating the next Tesla or Google “right here in West Baltimore,” May said, noting what he sees as unlimited possibilities for the area.

“We can’t fix every problem or turn back the hands of time,” Bramble said. “But, we can work with everybody here.”