Ravens have to run the table to win AFC North 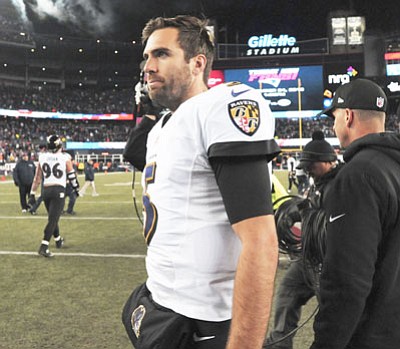 Ravens quarterback Joe Flacco walks off the field after the week 13 loss to the New England Patriots. Courtesy Photo/NFL.com

BALTIMORE — After losing a close game in New England against the Patriots, John Harbaugh and the Baltimore Ravens find themselves behind the Pittsburgh Steelers in the AFC North standings. With only three games left in the season, time is running out for the Ravens to retake the top spot in the division and make a playoff appearance after missing out in 2015.

The Steelers have a road game against the Bengals while the Ravens host the Eagles this week. The two teams face each other in Pittsburgh in two weeks.

Pittsburgh wraps up the season at home against a Browns team that may still be searching for their first win. With Marvin Lewis on the hot seat, the Ravens conclude their season with a trip to Cincinnati against a Bengals team that may be playing their last game for their head coach.

The week 15 clash between the Ravens and Steelers will have a huge impact on who ends up being the AFC North champion. If the Ravens beat the Steelers, they would have the inside track towards winning the division. Baltimore would hold the tiebreaker because they will have won both games over Pittsburgh.

Harbaugh has a simple plan for the remaining games this season— win them all. It starts on Sunday, December 18, 2016 with the final regular season home game for the Ravens.

Fortunately for Baltimore, a struggling Eagles team will be their next opponent. Harbaugh cut his teeth in the NFL as a defensive backs coach as well as a special teams coordinator in Philadelphia.

With the big game coming against the Steelers next week, Baltimore has to make sure they don't look past their next game. It shouldn't be difficult for Harbaugh to keep the Ravens focused on this week’s game, as he faces his former team.

The Ravens have rebounded from a tumultuous season last year. Having Terrell Suggs and Steve Smith Sr. back to lead them on defense and offense has made a major difference for Baltimore.

Mike Wallace and Eric Weddle have both proved to be excellent free agent additions. Wallace has given the team the deep threat they desperately needed. Weddle has solidified the back end of the defense.

Baltimore has not been an active team in free agency in the past. Their two big free agent acquisitions were done with a Super Bowl in mind.

They know their window is closing for another championship. For that reason, the 2016 season is one in which they have to make a run.