Why are so many of us hiding behind our smartphones? 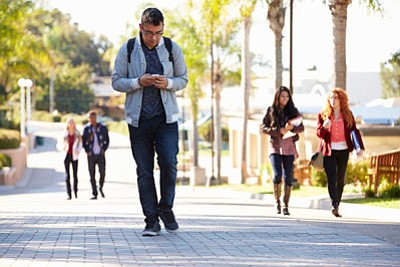 Texting while walking and retreating behind headphones in public are just symptoms of a larger social illness, according to Bill Flietcher, Jr. ClipArt.com

NNPA — It hit me the other day that there is a new protocol involved in walking down the street. I never really thought about it before, but I suddenly realized that people who text while walking, expect that those of us not texting while walking will simply get out of their way.

Forgive my naiveté, but I grew up with the strong instruction that when you walk, you look where you are going. When you cross the street, you look both ways to ensure that you are not run over. You know, little things like that. However, something has happened and these rules are being thrown up in the air.

There are two related, though different, examples of this new protocol. One involves texting and the other involves, well I am not sure what else to call it but being oblivious. In the case of texting, I have actually tested out my theory. Individuals will be walking towards me texting completely ignoring their surroundings or that they are approaching me. I will then say, fairly loudly, “Watch yourself!” The response that I have received is intriguing. The individual tends to look completely discombobulated and act as if it was somehow inappropriate for me to notify them that they were on a collision course.

This absent-minded, unconsciousness seems to be very widespread. People walking down the street are either talking on their cellphones, texting on their cellphones or listening to music with their ear buds, completely out of touch with their surroundings. Such individuals cross the street in the face of on-coming traffic, apparently making the assumption that the traffic will avoid them. While they may get out of the way of oncoming pedestrian traffic, they also seem to take their time walking, ignoring that there might be a line of people behind them a half block in length.

What are we to make of this? The easy part is that it is a form of self-centeredness. Individuals are acting as if the world exists to serve them and frankly, the hell with the rest of us.

Yet, the deeper problem seems to reflect the way that increasing numbers of us are retreating into various self-generated bubbles. These are the same bubbles that lead us to narrow what we read to only things with which we agree; to believe that our “friends” on Facebook and Twitter are an actual sampling of global opinion; these bubbles lead us to not wanting to be bothered with social interaction with many others, including our ACTUAL friends; and for some, to live in guarded and gated communities cut off from much of the rest of the world.

Yes, texting while walking and thinking that the rest of us will get out of the way is rude; and being oblivious to your surroundings while walking is stupid, but the problem is deeper and seems to reflect the retreat of so many of us from the reality of a thriving global village.