'Barry' zeroes in on formative window in Obama's early life 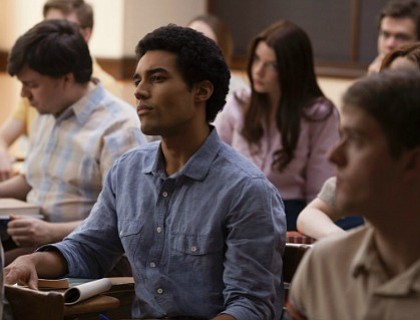 (CNN) — Early-onset nostalgia about President Obama gave rise to a pair of biographical movies this year: "Southside With You," imaginatively chronicling his first date with future First Lady Michelle; and now "Barry," which also visits Young Mr. Obama in his college years, this time as he arrives at Columbia University in 1981.

Despite all that's known about Obama, these respectful dramatizations of his life merely reinforce a sense of how smooth, and in ways impenetrable, he remains for those attempting to get under his skin.

Understated and spare, "Barry" features a strong performance by Australian newcomer Devon Terrell in the title role -- reflecting the name he used before Obama embraced his cultural roots and went by Barack -- and zeroes in most effectively on issues of race that helped shape a man whose election was supposed to, but didn't, usher in a greater sense of racial harmony.

"I'm the only black person in four of my five classes," Barry explains at one point, later telling a friend, "I fit in nowhere."

Those feelings of dislocation are illustrated as he moves back and forth between African-American and white social strata, from pickup basketball games (Terrell has even mastered Obama's left-handed release) to having an uncomfortable dinner with the wealthy parents (Linus Roache, Jenna Elfman) of his college girlfriend (Anya Taylor-Joy, actually a composite character).

Yet as a movie, that narrative spine is slim, to say the least, making "Barry" interesting in places but never particularly dramatic or engaging. Barry expresses opinions in class, has a stoner friend and surprises people with his polished moves on the court. Still, these are mere glimpses of Obama as a young man, without adding much -- to anyone who has paid attention, anyway -- to understanding him as a whole.

Directed by Vice correspondent Vikram Gandhi, "Barry" acknowledges taking a degree of license with these 35-year-old events in pursuit of presenting a formative window that helped frame Obama's broader outlook.

The latest movie is well timed, to the extent there's a growing wistfulness among supporters as the president's eight years in office come to an end. That said, "Barry" leaves plenty of room for future Obama biographers to operate.