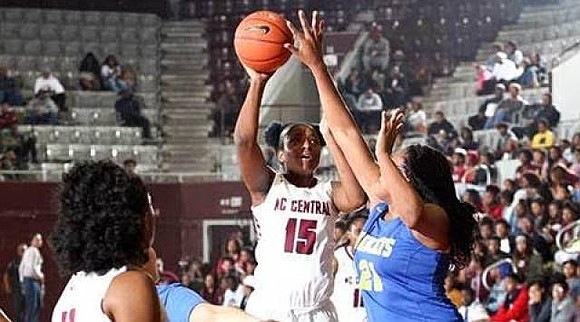 GREENSBORO, N.C. - North Carolina A&T men’s basketball coach Jay Joyner had his team focused on rebounding effectively against a very good rebounding team in Rider Sunday afternoon at Corbett Sports Center. For the most part the preparation was effective. But with 8.3 seconds remaining, Rider’s Khalil Thomas putback a Jimmie Taylor miss to lead the Broncs to a 60-59 win in the Aggies’ third game in the Gotham Classic.

WASHINGTON, D.C. - Solomon “Solo” Mangham scored 10 of his team-high 17 points in the second half, including two key baskets and a couple of free throws to help Howard University hold off Central Penn, 67-60 in a non-conference men’s game at Burr Gymnasium. The win was the second straight for the Bison, who improve to 3-8 on the season.

SEATTLE, Wash. — Senior center Tiyonda Davis of the Savannah State University women’s basketball recorded five blocks to set the school record in the Division I era as the Lady Tigers fell to No. 11 University of Washington 87-36 in Alaska Airlines Arena Sunday.

NaJai Pollard and Mikah Aldridge led Delaware State with 16 points each. Pollard also had a team-high 10 rebounds to post her sixth double-double of the season and 14th in 39 collegiate games. She also had four blocks to give her nine in the last two games.

Aldridge was six-for-six at the free throw line, and also led the Lady Hornets with three assists and four steals to tie her season best.

Freshman Kia Abrams came off the beach to score a career-high nine points for Delaware State. She was three-for-six from the field, including two-of-five from three-point territory, in the contest.