Taking the 'school-to-prison pipeline' to the stage 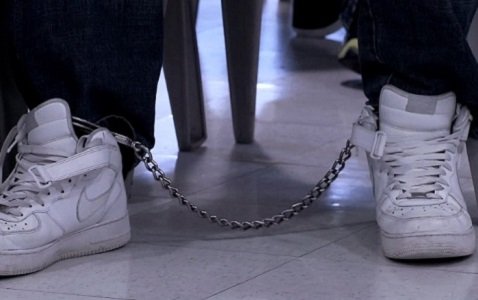 (CNNMoney) — Linda Cliatt-Wayman has the daunting task of being the principal at Strawberry Mansion High School in Philadelphia. Nearly forty percent of her students have special needs, many of them are reading below their grade level and almost all of them are people of color whose families have been affected by poverty or incarceration.

"They can't read, they can't follow directions. Who's gonna give them a job?" says an exasperated Wayman played by actress Anna Deavere Smith in the off-Broadway one-woman play, Notes from the Field. "That's why they turn to crime."

Despite those obstacles, Wayman is passionate about teaching her students to read and exposing them to life beyond a prison cell. "You can't have a life if you don't inspire or hope for anything."

Wayman is one of 17 people Smith profiles during the two-hour performance (which ends its run in New York City this weekend). Smith said she was inspired to do the project when she first heard about the "school-to-prison pipeline," in which poor minority students are disciplined more harshly than white students and are more likely to end up in prison at an early age for minor offenses.

"It all clicked," said Smith in an interview with CNNMoney. "I was like 'Yeah, middle class kids get mischief, our kids get pathologized and criminalized."

Smith seamlessly morphs into her interview subjects, which include a formerly incarcerated Native American man, a Latina mother and civil rights activist and Congressman John Lewis. She began working on the project in 2013 and since then, has conducted 250 interviews across the country about education, incarceration and a resurgent civil rights movement that has been reignited by videos of black Americans being killed or abused by police.

According to data from the U.S. Department of Education, black preschool students are 3.6 times more likely to be suspended than white preschool students. Black students from kindergarten through twelfth grade are nearly four times more likely than their white peers to receive one or more out-of-school suspensions. As adults, black and Latino men represent 59% of the 1.6 million men in U.S. prisons.

"It's sort of unfair to blame schools and teachers because it's really an outgrowth of what the nature of poverty is in America now," Smith said.

Throughout the show Smith weaves in video clips, including one of a black high school student in South Carolina who was violently dragged out of her classroom by a school officer in 2015.

On stage Smith personified Niya Kenny, a classmate who shot the now viral video with her phone. Kenny said she felt compelled to record what she was seeing in order to protect her classmate. "How can you mind your business?" Kenny told Smith. "That's something you have to make your business."

Including the stories of women and girls was also important, Smith said.

"I understand that we are concerned about the vulnerability of boys and men, but many of our girls now are also very, very vulnerable," she said.