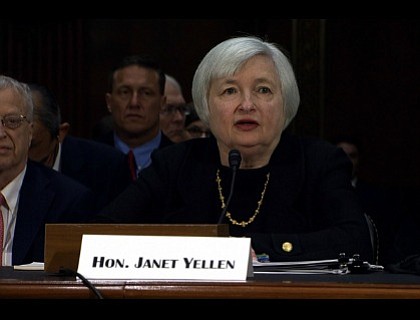 Federal Reserve Vice Chair Janet Yellen is pictured at her confirmation hearing to be the next head of the Federal Reserve on Thursday, November 14, 2013. Pool

"You are entering the strongest job market in nearly a decade," Yellen told graduates at the University of Baltimore on Monday. "The job prospects and career opportunities for new graduates at this time are very good."

Studies show that robots and machines have taken away far more manufacturing jobs than Mexico or China has.

"Globalization has reinforced the shift away from lower-skilled jobs," Yellen said. "The jobs that globalization creates in the United States...are more likely to be filled by those who, like you, have secured the advantage of higher education."

The average college graduate last year earned about 70% more than a typical high school graduate. That gap has widened since 1980 when college grads only earned 20% more than their high school peers, according to Yellen, citing Pew Research and the Council on Economic Advisers.

It's not all about money though: "Research also shows that a college or graduate degree typically leads to a happier, healthier, and longer life," Yellen told graduates, citing a study by two economics professors.