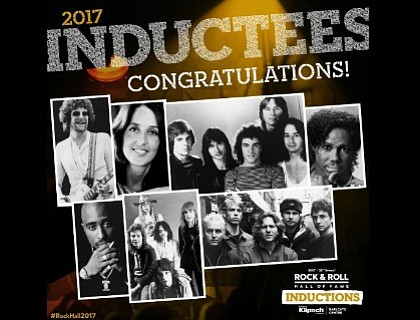 The Rock and Roll Hall of Fame Class of 2017 has been announced. This year's inductees are Joan Baez, Electric Light Orchestra, Journey, Pearl Jam, Tupac Shakur and Yes. The group was selected out of 19 nominees Rock & Roll Hall of Fame

The group was selected out of 19 nominees.

All of the inductees were first time nominees with the exception of Yes.

To be eligible for nomination, an individual artist or band must have released their first single or album at least 25 years prior to the year of nomination. This year marked Pearl Jam and Shakur's first shot at eligibility.

The inductees were selected by more than 900 voters of the Rock and Roll Hall of Fame Foundation. The organization also aggregated fan votes. Electric Light Orchestra, Journey, Pearl Jam and Yes won the fan ballot, along with The Cars.

Nile Rodgers will also be honored with an award for musical excellence.

The ceremony will be aired on HBO. Tickets for the event will go on sale in January.