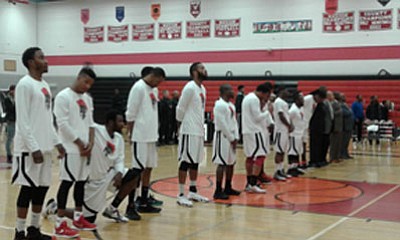 Lowell Ulmer, (third from left) shooting guard for the DMV Warriors basketball team “takes a knee” during the singing of the National Anthem before the game on December 11, 2016. Courtesy Photo

BALTIMORE — The American Basketball Association (ABA) released its power rankings and the DMW Warriors outpaced 25 other national teams to shine as the leader of the pack. Demonstrating their athleticism on the court is part of the job however, off the court they excel academically.

Approximately 90 percent of the team have graduated from college, according to Andre Vaughn, owner of the DMV Warriors.

The DMV Warriors, based in Gwynn Oak, Maryland, is a ABA professional basketball team sponsored by Dwayne Wade (www.wayofwade.com) of the Chicago Bulls.

The players’ hometowns range from New York City, Florida, Virginia and Maryland. All of the members of the 11-member team have traveled the world to sharpen their skills, strengthen their business acumen and to experience other cultures.

Dylon Cormier earned his degree in public relations from Loyola College. Cormier traveled to the Netherlands for 10 months to hone his athletic prowess. Twenty-four hours prior to the first game, Cormier was notified that he would be part of the team’s starting line opening night.

Andrew Washington participated in a tournament in the Ukraine and returned to the United States as the leading contender, in addition to winning an undisclosed profit.

As part of the starting line-up for the DMV Warriors, Smith traveled to China for a year to play basketball. As an impact player on the court, the point guard encourages high school and college players to “keep your head in the books.” As young athletes develop their athletic abilities, Smith says they should “shop their skills and talents.”

According to Frank Jones, president of the DMV Warriors there are three key virtues that make a quality player for the DMW Warriors—integrity, humility and a good attitude. Jones is responsible for scouting for new talent, player development and developing community relationships.

In light of the peaceful protest of professional athletes across the country, “taking a knee” during the National Anthem at games, Jones says the organization would support a player’s position.

“We understand what’s going on and will not turn a blind-eye to it,” said Jones.