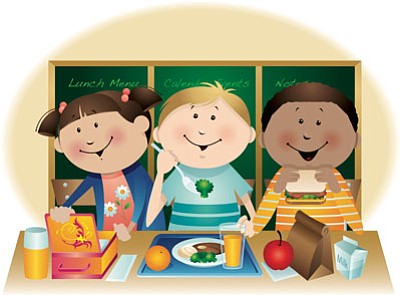 To save lives and trim budgets, parents and policymakers alike need to make sure kids learn about health habits early. Metro Creative Graphics

BALTIMORE — America has a big, fat problem. A whopping 13 million American children are obese— and millions more are about to join their ranks. By 2025, according to a report in Pediatric Obesity, the nation will house 17 million obese kids.

This is alarming. Obesity can lead to a slew of dangerous health complications, like diabetes, hypertension, and heart disease. And it imposes immense costs on the nation's healthcare system.

To save lives and trim budgets, parents and policymakers alike need to make sure kids learn about health habits early.

Unsurprisingly, the biggest culprit in childhood obesity is diet. Only eight in 100 children eat the recommended amount of fruit. Fewer than two in 100 eat enough vegetables.

Young Americans wolf down a lot of junk food, though. One in three kids eats fast food every single day. One in four high schoolers drinks soda daily.

Kids also aren't getting enough physical activity. Right now, less than half of young Americans get the hour of daily exercise recommended by the U.S. Department of Health and Human Services.

Insufficient exercise coupled with poor food choices is a recipe for disaster. The overwhelming majority of obese children— 80 percent— don't shed weight as adults, so are destined for a lifetime of obesity.

Schools are uniquely situated to whip kids into shape. Children spend most days at school— and typically have at least one meal there. So teachers and administrators could provide students with the resources to stay healthy. But most haven't.

Only four in 10 high schools— and just two in 10 middle schools— require students to learn about nutrition. Physical education is vanishing, too. More than 20 percent of schools have removed physical education requirements— and fewer than one in 10 offer daily gym classes.

One study found that adding an hour of gym class for students in kindergarten through fifth graded reduced Body Mass Index (BMI) by half a point, on average.

Some schools are embracing creative ways to keep students healthy.

At Pulsaki Elementary School in Delaware, for instance, each student receives a fruit or vegetable to eat during snack time. They also can participate in a walking club and receive fun tokens to decorate their backpacks based on the number of minutes they've walked.

The First Lady also has inspired schools to help kids eat better and exercise more. Thanks to a national initiative called Let's Move!, many schools now work with local chefs to ensure that meals are healthy and tasty. More than 20,000 schools also have committed to integrating 60 minutes of physical activity into their student's daily schedule.

Implementing and participating in initiatives like these can help students get healthy— and stay healthy throughout their lives. That'll drastically help these children— and save our healthcare system big.

Kenneth Thorpe is professor of health policy at Emory University and chairman of the Partnership to Fight Chronic Disease.