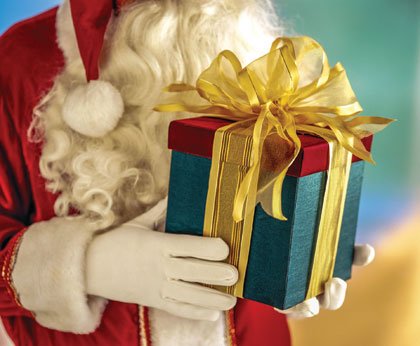 (CNN) — He's making a list and he's checking it twice -- but Santa Claus will have to wait for the January transfer window if he's to shower his own football club with presents.

That's right, the man in the big red suit with the bushy beard is a fan of a team in the northern Finnish city of Rovaniemi -- and it's called FC Santa Claus.

While Santa is busy all year round preparing for his travels across the globe, he still has time to sled down to the Rovaniemen Keskuskenttä stadium.

Rovaniemi is situated on the Arctic Circle at the heart of the Barents region, some 835 km from the capital Helsinki.

An estimated 65,000 people live in Rovaniemi, which has been the administrative center of Lapland since 1938.

Over 500,000 visitors travel to Finland's most northern province each year to meet Santa and experience the captivating scenery.

And while most don't make the trek to watch the football, FC Santa's popularity has continued to rise since its inception in 1993.

The club, which plays in the lower leagues of Finnish football, has fans from across the world who are inspired by its rather novel supporter.

"I've been involved with the club for 25 years," Juha Eteläinen, a former player, told CNN.

"We've got a very special group of people here and we embrace the whole Santa thing."

It lost one game 16-0 and conceded nine on two different occasions.

But while the defense might have been handing out presents right, left and center -- its spirit remains unbroken.

This week the team is in China to play a friendly game against a local side in Beijing.

But Santa won't be in attendance on this occasion -- apparently he has work to do.