What are heart failure, heart attack and cardiac arrest? 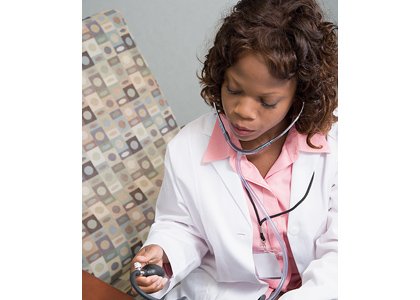 continued — Another less frequent cause of a heart attack is a spasm caused by tobacco or possibly illicit drugs, such as cocaine, which then disables the heart muscle, according to the American Heart Association. A tear in the artery, though rare, can also result in a heart attack.

The association says heart attacks can be fatal, but they do not automatically lead to death. The group advises that immediate emergency medical help can often prevent a heart attack.

"And if you think someone is having an heart attack, call 911 -- don't wait," said Goldberg, who explained that the reason it's important to take an ambulance to the hospital instead of, say, hitching a ride with a family member or friend is they are equipped to treat cardiac arrest on the way to the emergency room.

What is sudden cardiac arrest?

While a heart attack occurs when circulation of blood is blocked, cardiac arrest is the result of electrical disturbances that cause the heart to suddenly stop beating.

"Sudden cardiac death is an electrical problem, where your heart's rhythm is rapid and irregular and your heart can't pump effectively so you suddenly collapse," Goldberg said.

As you might expect, a sudden, unexpected loss of heart function results in an equally sudden loss of breathing and consciousness.

Survival is possible following sudden cardiac arrest with treatment. Once again, CPR, a defibrillator or chest compressions could save someone's life until emergency personnel arrive.

One cause of sudden cardiac arrest is a heart attack.

"Sometimes people who are having heart attack have a complication of sudden cardiac death if they don't get to the hospital soon enough," said Goldberg. Yet, most heart attacks do not lead to sudden arrest, according to the American Heart Association.

Goldberg added that another risk factor for sudden cardiac death is a genetic predisposition to heart rhythm problems. In families where people are known to die suddenly, the family is screened and closely monitored, Goldberg said.

The most common warning signs of a heart attack are discomfort (sometimes pain) in the chest; lightheadedness, nausea or vomiting; pain in the jaw, neck or back; discomfort in the arm or shoulder; and shortness of breath. Some of these may occur more often among women, and others more often among men.

By comparison, sudden cardiac arrest strikes without warning: A person collapses and has no pulse, no consciousness and no breathing.

Overall, heart attacks are more common than cardiac arrest in the United States.

During 2014, for example, the American Heart Association calculated about 565,500 sudden cardiac arrests. By comparison, nearly 750,000 Americans have a heart attack each year, according to the association.

Worldwide, heart disease is the leading cause of death, accounting for more than 17.3 million deaths each year, a number that the American Heart Association expects to grow to more than 23.6 million by 2030. "Heart disease" includes all forms of possible heart troubles, such as heart failure, heart attack, sudden cardiac arrest, heart defects at birth, arrhythmia and cardiomyopathy (an enlarged heart muscle usually caused by genetics), high blood pressure and high cholesterol.

While any heart problem can ultimately lead to death, the most immediately life-threatening are heart attack and sudden cardiac arrest.

"I think it's really important for us to focus on preventing people from having heart attack through lifestyle changes," said Goldberg, who suggested not only good diet and physical activity but also the need to get routine checkups and, if necessary, treat any blood pressure or cholesterol problems.

"Interestingly enough, our rate of heart attacks in men and women have decreased over the last 10 years," said Goldberg. "I think it will take time with the recent increase in all these risk factors to see if we are going to see a bump, but I can't predict that." Though hopeful, she sighed, adding: "That's a concern of mine."