BLACK AUTHOR/THINKER reveals the truth about 18 controversial subjects in her new book, "PSST: PLEASE SOMEBODY SPEAK THE TRUTH" 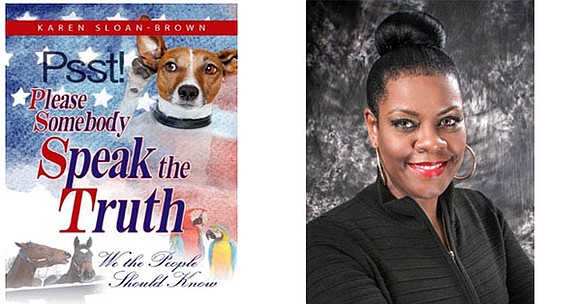 Nationwide (BlackNews.com) -- Dr. Karen Sloan-Brown says, "Stop the Lies! The 2016 Presidential election was built on a foundation of lies. Hillary Clinton was the victim of so many. Donald Trump became the victor through the use of so many." And her newly released book entitled Psst: Please Somebody Speak The Truth aims to start the process of separating the facts from fiction. She emphasizes that it’s ‘time out’ for politicians telling the people what they are going to do for the country. They are simply representatives. It’s high time they do what the people want done. In her opinion, the country is now caught up in a “Ball of Confusion.”

"Psst: Please Somebody Speak The Truth discusses the truths and mistruths of eighteen controversial subjects that U.S. citizens should carefully explore: democracy, capitalism, voting rights, income inequality, greed, entitlement programs, outsourcing, wages and inflation, gun control, the criminal justice system, global warming, affirmative action, education costs, paying college athletes, Iraq and ISIS, War, and the Barack Obama Presidency. She addresses the critical need for this country to define and clarify its understanding and beliefs on a number of fundamental issues to make educated choices, “This nation can’t continue to cast its votes based on name recognition.”

William Faulkner, a great American writer once said: “Never be afraid to raise your voice for honesty and truth and compassion against injustice and lying and greed. If people all over the world... would do this, it would change the earth.”

Sloan-Brown cautions that the U.S. is in a precarious position because its leadership is no longer trustworthy. Most have gained their elevated positions of leadership through the power of persuasion, deftly convincing the people they have all the answers. She says the new president-elect, Donald Trump, is a master of this game. He and a host of politicians compellingly communicate all the things some folk yearn to hear, some of it honest, most of it downright deceitful. Her book seeks to navigate through the power-seeking voices that have become increasingly brazen, distorting the facts, misrepresenting truths, and threatening to undermine hundreds of years of progressive gains for their personal and privileged interests.

Dr. Karen Sloan-Brown, is the author of several books, the non-fiction A Reflection: What a Difference a Day Makes, What About 100 Years?, Educating the Nation on a Shrinking Budget, and six novels, including The Fortunes of Blues and Blessing, Searching for Everland, and A New Season: The Fortunes of Blues and Blessings - Book Two. She is currently the Research Lab Coordinator of the Molecular Biology Core Facility at Meharry Medical College. She lives with her husband and daughters in Nashville, Tennessee. For more details, visit her web site at www.karensloanbrown.com