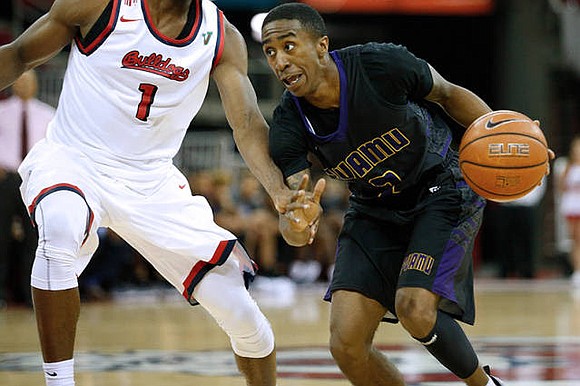 Ten different players scored for the Panthers, with forward Zachary Hamilton leading the way with 18 points and Troy Thompson adding 16. The Panthers forced 23 turnovers, scoring 32 points off of the Rams' miscues.

Prairie View grabbed a 20-11 lead with just over 12 minutes remaining in the first half. Huston-Tillostson closed to within one a couple of times and took the lead once also with 8:17 remaining, but PVAMU was able to advance their lead to 12 before the break. In the second half, the Panthers coasted, leading by as many as 32 points.

BATON ROUGE, La. - Southern was held to 34 percent shooting from the field and committed 16 turnovers in a 64-53 loss to Southeastern Louisiana.

Neither side was on-target early, but the Jaguars were particularly cold from the floor early. Southern shot 23.1 percent (6-of-26) after missing its first 11 shots en route to facing a 28-25 deficit at the break. SELA opened the second half on a 10-0 run, and the Jaguars were unable to catch up, getting no closer than eight.

Chris Thomas led the Jaguars with 16 points while Jared Sam had 15 points and eight rebounds.

MONROE, La. - A rough shooting night did in the Grambling State Tigers during an 81-45 loss to Louisiana-Monroe Wednesday night.

Grambling State, who came in averaging a league-leading 75 points a game, was held to 34 percent shooting on the night in its second-lowest scoring output of the year. The Tigers fell behind by double-digits quickly, as ULM scored 20 of the game's first 25 points.

From there, Grambling was forced into a catchup scenario, but the lack of offensive punch carried into the second half, where GSU managed 17 points in the frame while ULM scored 37 to pad its lead.

Remond Brown led Grambling with 12 points but was 3-of-13 from the floor, Nigel Ribiero added 11 points.