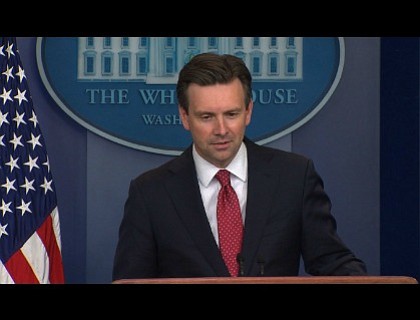 White House spokesman Josh Earnest had a sharp response when asked about Donald Trump's suggestion the presidential candidates take drug tests ahead of Wednesday's debate. "You're telling me that the candidate who snorted his way through the first two debates is accusing the other candidate of taking drugs? That's a curious development in the campaign," Earnest said. CNN

(CNN) — NEW YORK -- Josh Earnest has some advice for Sean Spicer, who will soon be taking over his job as White House press secretary.

"Make sure you know where the president's head's at," Earnest said, "because your ability to faithfully represent his point of view is critically important."

A big part of Earnest's job for the past two and a half years has been representing President Obama's views during daily White House press briefings.

In a recent set of interviews for CNN's "Reliable Sources," Earnest and other Obama press aides said they had prepared a stack of briefing materials for their successors.

"Even though obviously many people in this building, including the president, were rooting for somebody else, we have already prepared a binder to provide to the Trump team," Jen Psaki, the outgoing communications director, said.

It is full of logistical information that transcends party affiliation -- "everything from how to do a briefing to what to do when Marine One lands," she said.

The interviews took place before Spicer, Miller and Hicks were named to their respective posts. When asked what the Trump administration should know about the press-president relationship, Psaki said "there are certain things that will make their lives easier, that may be contrary to what they or others may think."

The press briefing is an example: "It has a certain efficiency," she said. "There are hundreds of questions that come into the White House every day. There would be no way to answer those if we didn't have a press briefing every day."

Trump aides have spoken publicly about rethinking some aspects of the daily briefings.

Both Psaki and Earnest asserted that the briefings have an important function for democracy, providing accountability to the public.

Of course, White House correspondents can recount many, many times when Earnest and his predecessors evaded questions and sparred with reporters during briefings and outside them.

"I think that people can understand that there's a give and take," Earnest said, and other times when "I am asked about things that I can't discuss publicly."

But, he said, continuing to share advice with his successor, "none of that should come close to compromising the truth. Once it does, it significantly undermines your ability to be an effective advocate for the administration and for the things that you believe in."

Watch the interviews with Earnest and Psaki on Sunday's "Reliable Sources," 11 a.m. ET on CNN.