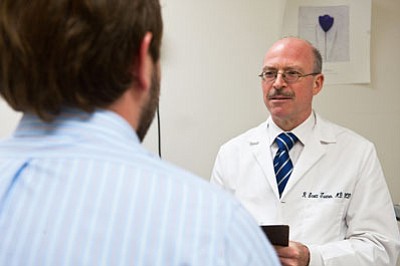 Lead study Dr. R. Scott Turner, Ph.D. is the director of the Memory Disorders Program at Georgetown University Medical Center in Northwest, Washington, D.C. The Alzheimer’s Prevention Initiative is working with researchers at Georgetown University in Washington to recruit participants for a research study in cities across the country. Courtesy Photo

BALTIMORE — Officials at the Alzheimer’s Prevention Initiative say they have made great strides in the fight to find a treatment to delay symptoms of Alzheimer’s or to prevent the disease altogether. The organization is working with researchers at Georgetown University in Washington to recruit participants for a research study in cities across the country.

“To date, we have screened two and enrolled zero participants at Georgetown University Medical Center. Our goal is to enroll at least 10 participants at our site,” said Dr. R. Scott Turner, Ph.D., director of the Memory Disorders Program at Georgetown University Medical Center in Northwest, Washington, D.C. “For the nationwide study, we estimate that we will need to screen approximately 100,000 people to obtain the approximately 1,300 cognitively healthy older adults, who carry two copies of the e4 type of the APOE gene and are eligible for the Generation Study.”

APOE is a gene that makes apolipoprotein E. There are three different types of the APOE gene called alleles – e2, e3, and e4 and everyone has two copies. The combination of the three determines an individual’s APOE genotype.

The Generation Study seeks to recruit participants between the ages of 60-75, with no cognitive impairments, but who are likely to develop the more common form of late-onset Alzheimer’s based on genetic risk.

This study will be the first to incorporate genetic testing and counseling into the screening process.

The API Generation Study serves as a complement to the research being conducted in Colombia that was highlighted on 60 Minutes earlier this month.

The Colombia study, which serves as a complement to research being conducted in Colombia is being conducted among a large Colombian family that has a rare genetic mutation which makes them certain to develop Alzheimer’s by their mid-forties.

The study consists of two parts. Part I includes assessments of memory, thinking, and mood, along with meeting with a healthcare professional to learn your APOE gene test results. All participants who learn their APOE results will be followed for one year. Individuals who learn that they have two copies of the e4 type of APOE may be eligible for Part II of the study, examining whether anti-amyloid medications— compared to placebo— prevent the onset of memory and thinking problems associated with Alzheimer’s disease.

Participants in Part 2 of the trial will be followed for five to eight years and will be asked to visit the study site every few months.

The Generation Study is largely being recruited through the Alzheimer’s Prevention Registry’s GeneMatch program which connects Alzheimer’s prevention studies with eligible volunteers, based in part on their genetic status.

Through GeneMatch, interested individuals submit a genetic sample to be analyzed.

Turner and fellow testers are hopeful that by targeting changes in the brain before symptoms of Alzheimer’s disease appear, they can make significant progress towards staving off or preventing the disease.

“Prevention,” said Turner. “Will likely be, easier than cure.”

Visit www.endALZnow.org/GeneMatch or www.generationstudy.com for more information about GeneMatch and the Generation Study. Interested individuals in the Baltimore/Washington metropolitan area may also contact the George Washington University Medical Center Memory Disorders Program at 202-784-6671.