Dogs may go gray when stressed, just like US presidents, study says 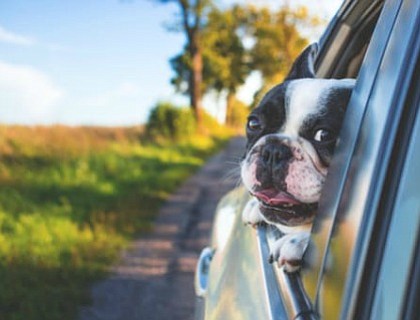 Whether you call them gray hairs or stress highlights, world-renowned animal scientist and autism advocate Temple Grandin wants you to know that dogs may get them prematurely, too -- especially when stressed, such as being left at home alone. Pexels

(CNN) — Whether you call them gray hairs or stress highlights, world-renowned animal scientist and autism advocate Temple Grandin wants you to know that dogs may get them prematurely, too -- especially when stressed, such as being left at home alone.

Premature graying in dogs may be an indicator of anxiety and impulsivity, according to a study published in this month's edition of the journal Applied Animal Behaviour Science, in which Grandin served as a co-author.

Camille King, an animal behaviorist and owner of the Canine Education Center in Denver, noticed a few years ago that many impulsive and anxious dogs seemed to be prematurely turning gray. When King told Grandin about her observations, Grandin said she encouraged King to lead the research.

"The first thing I thought of when she told me that were the presidents, and how they age and get prematurely gray," said Grandin, professor of animal science at Colorado State University, referring to American commanders in chief.

"The fact that presidents turn prematurely gray was one of the things that made me encourage her to do the study," Grandin said. "Basically, (the study findings) validated what she had seen in years of doing dog behavior work."

The study, conducted at Northern Illinois University, involved 400 dogs, 4 years old or younger, with non-white-colored hair so the researchers could adequately determine degrees of graying.

The researchers took two photos of each dog and asked each dog's owner to complete a 21-question survey, which included questions about the dog's anxious or impulsive behaviors. Both behaviors hold clues to how stressed the dog might be, sort of like how emotional instability and anxiety are associated with stress in humans.

Anxious behaviors include whether the dog whines or barks when left home alone or cringes or cowers in groups of people, and impulsivity can be seen in whether the dog jumps on people when greeting them or excessively tugs on the leash when going on walks.

The dog owners were unaware of the true purpose of the study when they completed the questionnaires.

Next, the researchers compared the survey responses with how much gray hair appeared on the dogs' muzzles in their photos.

Grandin helped the researchers build a scoring system to measure the degrees of grayness: A score of 0 is "no gray;" 1 is for gray on the front of the nose only; 2 is for gray hair halfway up the muzzle; and 3 is "full gray."

It turned out that a high grayness score was significantly and positively predicted by survey responses that indicated both high anxiety and impulsivity.

"Essentially, the results indicate that for each standard deviation increase in the measured trait, either anxiety or impulsiveness, the odds of being in a higher rating category of muzzle grayness increase 40% to 65%," said Thomas Smith, a professor at Northern Illinois University's Department of Educational Technology, Research and Assessment, who was a co-author of the study.